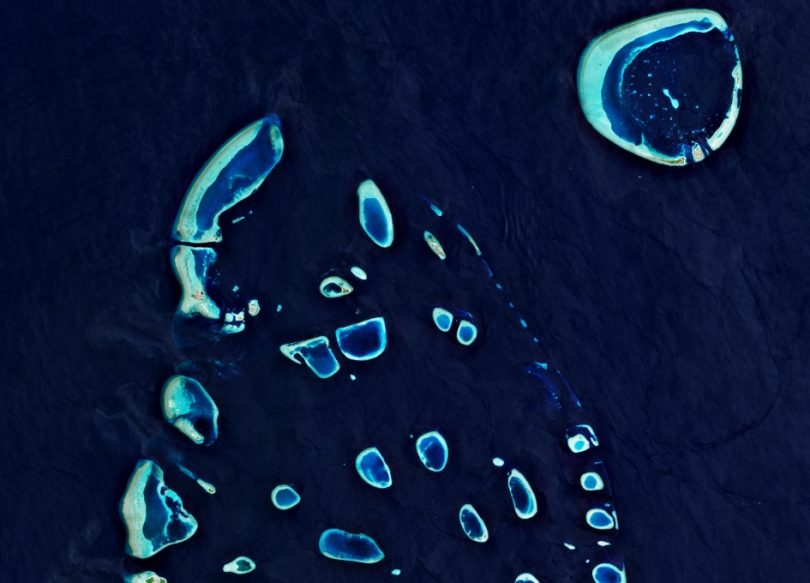 The Maldives are featured in this image captured by the Copernicus Sentinel-2 mission.

A popular tourist and diving destination with white sandy beaches, the Republic of Maldives is located in the Indian Ocean, around 700 km southwest of Sri Lanka. This island nation consists of a chain of around 1200 small coral islands that are grouped into clusters of atolls – scattered across 90 000 sq km of ocean.

An atoll is a circular or oval-shaped reef structure with a lagoon in the centre. These structures typically form around a volcanic island that has subsided while the coral grows upwards. The Maldives actually rests on top of an ancient volcanic mountain range.

In this image, the Ari Atoll in the west of the archipelago is featured. Ari Atoll is one of the largest atolls in the Maldives and is around 90 km long and 30 km wide. The turquoise colours in the image depict clear, shallow waters which contrasts with the dark-coloured waters of the deep Indian Ocean. Several clouds can be seen at the bottom of the image.

One of the world’s lowest-lying countries, more than 80% of the Maldives’ land is less than one metre above average sea level. This extremely low elevation makes the country, and its inhabitants, particularly vulnerable to sea-level rise.

Satellite data has shown that the global ocean has risen, on average, 3 mm a year over the last 25 years. But more alarmingly, satellite data shows the rate of the rise has accelerated over the last few years, and has been rising at around 5 mm per year. Warming ocean waters, melting glaciers and diminishing ice sheets is making rising sea levels a real threat for low-lying islands such as the Maldives.

The upcoming Copernicus Sentinel-6 Michael Freilich satellite, set to launch in November 2020, will map up to 95% of Earth’s oceans every 10 days. The satellite carries a new generation radar altimeter that will observe annual changes in mean sea level with millimetre precision, together with measurements of surface wind speed, sea state and geostrophic ocean currents. This new satellite will assume the role as a reference mission to provide critical data for the long-term record of sea-surface height measurements.

These measurements are not only essential for monitoring our rising seas, but also for climate prediction, sustainable ocean-resource management, coastal management and environmental protection.

ESA is jointly developing the mission with its partners NASA, the European Commission, EUMETSAT and NOAA, with support from CNES.

This image, which was captured on 12 April 2019, is also featured on the Earth from Space video programme.