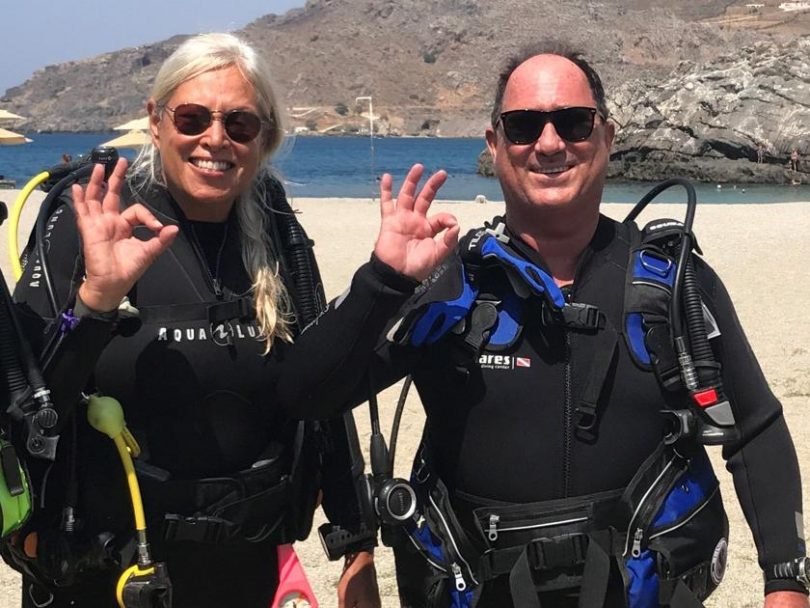 Amy O’Connor has seen the pain of disability.

She’s lived it, breathed it, and has seen the loss of loved ones who have ultimately succumb to it.

Now 52, Amy, who grew up in Romeo, has spent the last 32 years of her life dealing with the pain caused by 12 different conditions, primarily pancreatitis, neuropathy and post-traumatic stress disorder (PTSD) caused by multiple medical traumas. She suffers from restless leg syndrome, a condition that causes an uncontrollable urge to move the legs usually because of an uncomfortable sensation. It typically happens in the evening or nighttime hours when sitting or lying down. Moving eases the unpleasant feeling temporarily.

She watched the man she loved, David O’Connor, an Army Ranger, suffer so badly from injuries he acquired while serving overseas that he tried multiple times to kill himself before ultimately dying in 2011 at the age of 40. David had served in Panama and Iraq, Afghanistan. He was injured in a vehicle accident, most likely caused by a roadside IED, and developed such severe disc problems he spent most of his time after that walking with a cane or using a wheelchair.

He developed schizophrenia from what he’d seen in his tours overseas, mostly seeing innocent civilians used as human shields killed while fighting against forces in Afghanistan. He had to get a foot amputated. When he died, Amy said it was caused by a combination of seizures and excess medication in his system.

As she nears retirement, O’Connor, a former New Baltimore resident who now lives in Ira Township, has become focused on trying to use her experiences for a greater good to help others who have suffered and find positive outlets for those with disabilities. She knew she wanted to work for some sort of non-profit, but she didn’t know what. She wanted to find the right fit.

One day, she was looking for ideas on professional social site LinkedIn when she was pegged by Mark Rausch, a lifelong member of the U.S. Air Force. Himself a disabled veteran, Rausch had formed an organization called Poseidon Handicap Scuba Adventures (PHSA), based in Canton, that not only teaches handicapped individuals how to scuba dive but also teaches able-bodied individuals how to dive and serve as a dive buddy for disabled divers.

Rausch’s group is part of a worldwide campaign to set a world record for the most people with disabilities scuba diving together at an event in the Maldives (an island chain southwest of India) in March 2021. O’Connor, who has never scuba dived, felt an immediate connection to the campaign and quickly offered Rausch her help.

“Mark contacted me and said he needed my help. I said I didn’t know if I was ready, but it was ready for me,” O’Connor said. “These are people who are changing how to disable people look and how disabled people are perceived by the public. If I can use my energy to help these people, I’m all behind it. It’s a personal blessing, and it’s a great way to honour my husband.”

The diving effort is part of a three-pronged attack to set world records in the air, land and sea called C.L.A.W. Operation Blue Freedom. C.L.A.W. stands for Conquer Land, Air and Water. It includes a team of special forces veterans from the Indian Armed Forces. Each team member has been a soldier in the Indian Army or Navy special forces and was highly trained with multiple specializations in mountaineering, skydiving, and scuba diving. And each has suffered some form of disability caused by their military service. The Land group will attempt to become the largest group of people with disabilities (PwDS) to climb the world’s highest “Battlefield,” — Siachen Glacier in India. The “Air” group with an attempt to become the largest PwDS group to skydive over Dubai, UAE. And the Water group is where O’Connor and Rausch come in.

Rausch founded PHSA in 1992 to teach the disabled about the healing power of the sea. The buoyancy that comes with scuba diving puts able-bodied and disabled people on an even playing field, in which the ability to walk isn’t required.

Trying to define his great love for the undersea world, oceanic explorer Jacques Cousteau once said, “From birth, man carries the weight of gravity on his shoulders. He is bolted to the Earth. But man has only to sink beneath the surface, and he is free.”

A Michigan native, Rausch, 61, had a long and distinguished military career serving around the world that came full circle with his last assignment, a three-year stint at Selfridge Air National Guard Base in Harrison Township. He was stationed with the 127th Michigan Air National Guard as a bioenvironmental engineer from November 2013 until he retired in 2016.

He said the Veterans Administration considers him 70% disabled for severe PTSD that he suffered for several years while in the military and to a lesser extent in his post-military life.

While working with the Department of Veteran Affairs in Dayton, Ohio, Rausch heard about wheelchair games for disabled veterans as well as Discover Scuba, an introductory course for scuba that also had a course for disabled people. Already a scuba diver and a certified instructor, he took inspiration from both of those events to create Poseidon Handicap Scuba Adventures, a small non-profit. He got involved with the Handicap Scuba Association (HSA) and became a handicapped scuba Association, certified instructor.

“It was just something I wanted to do to help other people and share the beauty and fun of scuba with disabled individuals,” Rausch said.

At that time, he had no disabled people in his immediate family, but that would soon change with the birth of his son Robert in 1994, only two years after he created Poseidon. Robert was born with cystic fibrosis. He died at 18 years old. Like Amy O’Connor, Rausch, too, would feel the loss of a loved one due to disability.

“That just reinforced everything that I was doing,” Rausch said.

After his retirement in 2016, Rausch began travelling the globe, teaching dive shops how to train instructors in HSA techniques and teach disabled people how to scuba dive. With his help, disabled people around the world would be able to experience the joy of diving.

“All of these things helped fill the void of the loss a family member,” Rausch said of his son Robert.

In 2016, he met the members of C.L.A.W., flew to India and taught that group HSA skills. It was through C.L.A.W. that he learned about Operation Blue Freedom and the plan to set three world records. He will serve as one of the ambassadors of the program, trying to get disabled people, with an emphasis on veterans, to participate in the event. In particular, he hopes to encourage any disabled people in Michigan who might have interest in learning how to dive to look into the event.

Prospective candidates will need to complete their scuba book work and pool training stateside before heading to The Maldives. Diving there will be the “check out dives” or essentially the final exams of scuba diving certification. Participants would need to go to claw.global/participant/ to sign up.

Rausch said participants will need to finance their own travel costs for themselves and/or a partner to travel, which are expected to be between $12,000-$15,000 total. With such a long flight, Rausch recommends the disabled person travel in first class so they can have more room to spread out or lay down.

He also recommends spending three nights on the Indian mainland to allow for recovery from the time change before heading to The Maldives. After that, everything else including accommodations, food, travel, scuba gear and instruction will be covered by Operation Blue Freedom.

O’Connor will help prospective candidates with fundraising, either on their own or as part of the PHSA website. She said new websites are being developed and integrated with the global website, claw.global/. O’Conner herself will be one of the participants learning how to scuba dive.

“That’s a whole world under there that we hardly know about,” O’Connor said. “Visiting our oceans and seas is something that very few get to know about or experience. It’s fabulous therapy for PTSD. And when you experience pain every day, you can really look forward to experiencing buoyancy.”

“For me, this group means walking the walk, pushing through and finding ways to get things done,” O’Connor added.

Rausch said numerous COVID-19 protocols will be in place. And everyone will be tested for COVID-19 before they take their final flight to The Maldives.

While the three events are being billed as world-record attempts, Rausch said the main emphasis is on raising awareness and changing the perception of disabled people. He expects about 30 disabled divers to take place in the event, along with at least two able-bodied people per diver.

“Raising awareness, that’s the bottom line,” Rausch said. “There are not a lot of egos here. This is not for individual fame or glory.”

For more information about Operation Blue Freedom, go to phsa.us/.