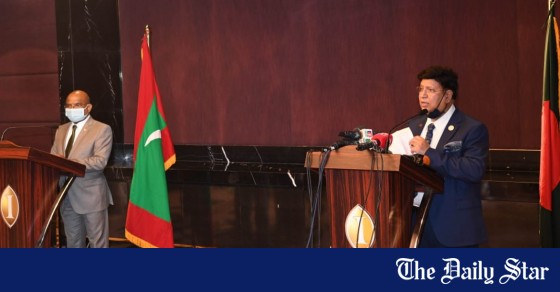 There will be direct flights between Bangladesh and Maldives as the two South Asian nations see huge scope to boost trade and tourism.

There may also soon be a shipping line between the countries.

“The good news is the prime minister has declared that very soon Bangladesh Biman will start operations from Dhaka to Male. We are expecting another good news — that we can begin direct shipping line from Chattogram to Male,” Foreign Minister AK Abdul Momen told reporters.

The revelation came at a joint press conference by Momen and his Maldives counterpart Abdulla Shahid at the InterContinental Dhaka today following a meeting between Bangladesh Prime Minister Sheikh Hasina and Maldives President Ibrahim Solih.

The trade and people-to-people contact between the two countries can be increased manifold through the direct air and waterway connectivity, he said.

During his talks with the prime minister at the Prime Minister’s Office earlier in the day, Ibrahim Mohamed Solih announced that they would protect the rights of the Bangladeshi migrants working in Maldives and that they are being covered under the Covid vaccination campaign free of cost.

“We have very cordial relationship with Maldives. We have achieved a lot during the visit,” Momen said.

The Maldives President Solih, his wife Madam Fazna Ahmed, Maldives Foreign Minister Abdullah Shahid and Economic Development Minister Fayyaz Ismail are on a two-day visit to Bangladesh to join the twin celebrations of Mujib Borsho and the golden jubilee of Bangladesh’s independence.