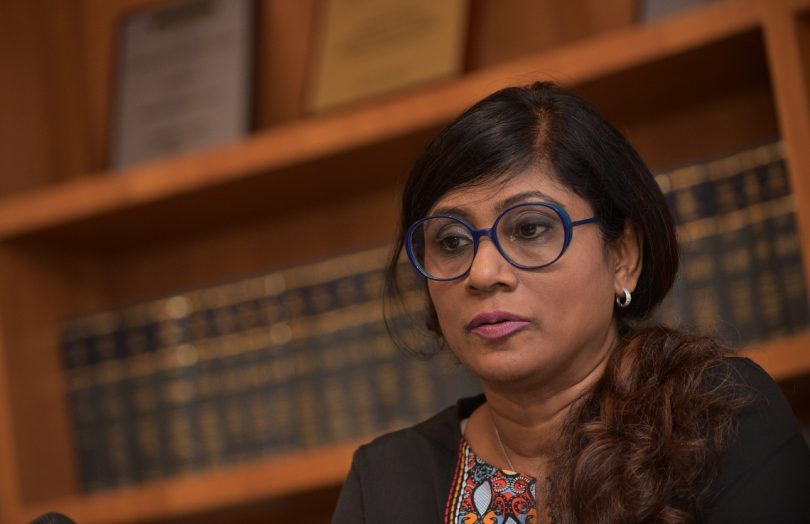 Minister of Defence Mariya Ahmed Didi declared on Tuesday that unpaid wages were not the root cause of the multiple demonstrations recently staged by expatriate workers across the Maldives.

Speaking at the Parliamentary Committee on National Security ad Foreign Relations, Mariya stated that there were hidden factors fueling the protests, led “using the term human trafficking” and banking on delayed salary payments.

Noting that whilst demanding repatriation the migrant workers had caused unrest and attacked officers of Maldives Police Service in Gaafu Alif Atoll’s Koodoo and Addu Atoll’s Herethere, the former human rights lawyer-cum-minister, reiterated her statement that unpaid wages were not fuelling the riots.

Back us with proof.. have dealt with these people for a long time.. they work like hell, eat what’s provided, and sleep in conditions you wouldn’t even step your foot in. The only thing they look forward is the remuneration they get at the end of the month.

A comment on the Defence Minister’s tweet claiming that expats who had received their full wages were amongst those who lead riots.

“Those [expats] employed by Island Expert [Pvt Ltd] went out and caused unrest while the company was somewhat paying them and holding discussions. Even during the riot at Bodufinolhu, the most noticeable factor was that they attacked the police”, Mariya said.

“Similarly, even in the Hulhumale’ riots, we see them attack our officers. Since this is the case, we believe that this is tied to national security. [The expats are] not necessarily getting out to ensure their rights because they haven’t received salaries”.

“We believe there are hidden factions [behind these efforts]”, she added.

Minister Mariya stressed that authorities cannot give permission for expatriate workers to reside in Maldives in such a way that threatened national security.

Since most of the discussions revolved around matters related to national security, the Committee meeting was later held behind closed doors.

Let’s for a moment entertain the whole notion about an ulterior motive for the protests. Even then the exploitation, wage theft, trafficking and human rights abuses are still an undeniable reality. What do we do about that?

Commenting on the recent expat-led demonstrations, Minister of Economic Development Fayyaz Ismail previously claimed, “political motivations” were driving the protestors, and that the events were being secretly orchestrated by a faction behind the scenes.

However, he noted that the political agenda was not being pushed by the current opposition, a coalition between Maldives Progressive Party (PPM) and People’s National Congress (PNC).

Various expat-led protests have recently taken place amid renewed concerns from rights groups as well as the general public, over the continued exploitation of expatriate workers in the Maldives.

A total of 41 arrests were made at the violent protest held on July 13, by expatriates employed at Island Expert Pvt Ltd in reclaimed suburb Hulhumale’, over unpaid wages and inhumane treatment.

Both of these protests resulted in property damage in addition to attacks on police officers, and migrant workers detained in these protests are currently under investigation.