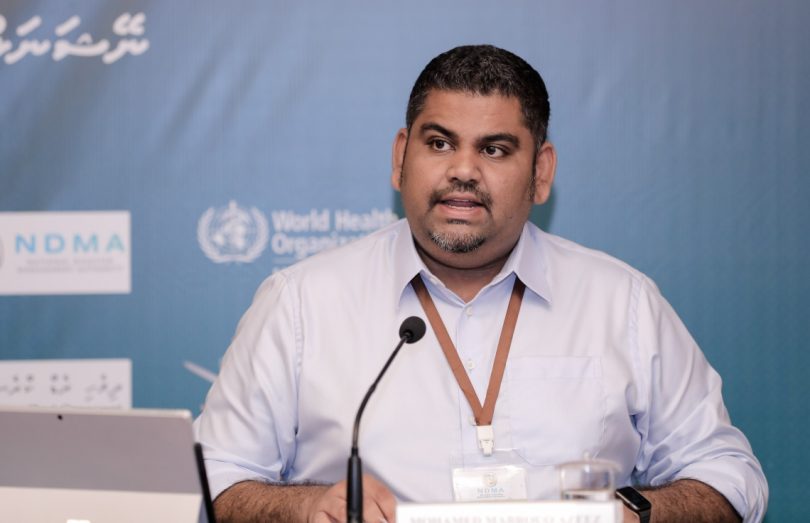 The National Emergency Operations Centre (NEOC), on Monday, revealed that an additional six islands were placed under monitoring amid the ongoing COVID-19 outbreak.

Furthermore, He revealed that Guraidhoo, Kaafu Atoll as well as the vessels Noofaru Express and Dhururaasthaa 8 were removed from the government’s monitoring list.

During the press conference, Dr Ibrahim Afzal also disclosed that three individuals that tested positive for COVID-19 were transferred to Dharumavantha Hospital for treatment. He stated that the patients included an 81-year-old Maldivian man, the 68-year-old Maldivian woman and a 48-year-old Pakistani national.

According to the doctor, only the Pakistani citizen required the assistance of a ventilator while the other two remained in a stable condition.

Maldives has recorded a significant increase in COVID-19 cases since its first confirmed case in the capital city of Male’ on April 15 involving a local woman that sought assistance from a flu clinic in Malé after developing symptoms.

Following the initial case, the Health Protection Agency placed the greater Male’ region under lockdown on April 17. HPA also declared a travel ban between all inhabited islands across the Maldives on April 16 as a precautionary measure to contain the spread of COVID-19 in the country.

With this new development, Maldives records 226 confirmed, 209 active and two probable cases of COVID-19, with a total of 17 recoveries.

The World Health Organization (WHO) has classified the spread of COVID-19 as a global pandemic. The new strain of novel coronavirus has infected over 3 million people and claimed over 209,000 lives around the world. However, out of those infected, more than 893,200 people have recovered.