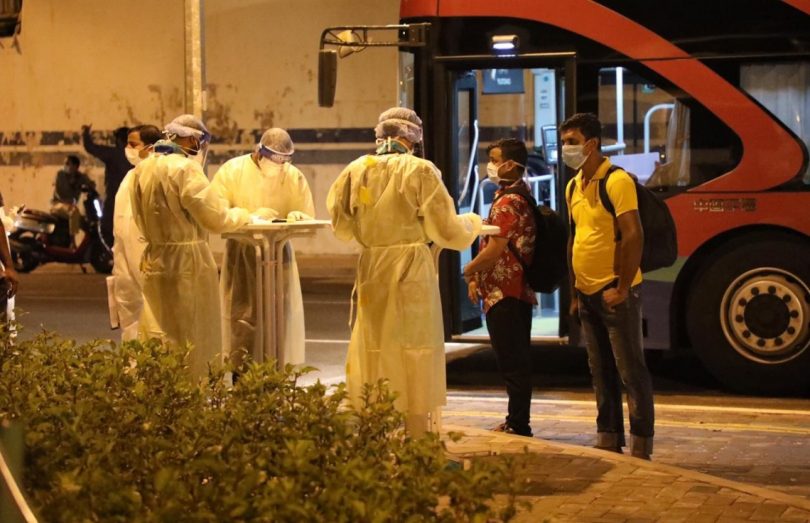 Maldives’ government on Thursday revealed plans to repatriate more than 500 Bangladeshi citizens to their country, amid the ongoing global COVID-19 pandemic.

Speaking at the daily held press conference hosted virtually by the National Emergency Operations Centre (NEOC), Communications Under-Secretary at the President’s Office Mabrouq Abdul Azeez stated that the individuals are set to fly out on May 16.

This is the second time the government has moved to repatriate Bangladeshi citizens working in the Maldives, back to their home nation.

Recently on May 1, Minister of Economic Development Fayyaz Ismail disclosed that work was underway to repatriate a further 300 Bangladeshi nationals.

“Most of them do not have official documents. It is not an easy process”, said the Minister, estimating that there were approximately 100,000 unregistered Bangladesh workers.

President Ibrahim Mohamed Solih later that same week, on May 5, also announced that 1,500 Bangladeshi nationals with undocumented status were to be repatriated within the following week. However, authorities have not provided an official update on this operation.

Since the beginning of the community-wide outbreak of COVID-19 in the Maldives, the total number of Bangladeshi expatriates that have tested positive for the virus has surpassed 500. Roughly 67 per cent of all confirmed cases in the country are foreigners.

At present, Maldives records a total of 982 confirmed cases of COVID-19 with 932 active cases, four fatalities and a total of 46 recoveries. Capital city Malé, one of the most densely populated places in the world, has recorded a significant increase in COVID-19 cases since recording its first local transmission on April 15.

Furthermore, the COVID-19 outbreak in the capital has disproportionately affected the expatriate population, the majority of whom are Bangladeshi nationals living in highly congested quarters where it is impossible to reduce contact or exercise social distancing. Their often small-spaced living conditions have been described by local and international civil society organizations as, “claustrophobic”, “unsanitary” and “overcrowded”.

Amid the pandemic, the government has mobilised efforts to transfer expatriate workers from cramped labour quarters to safer environments.

On March 12, 2020, the World Health Organization classified the spread of COVID-19 as a global pandemic. The new strain of novel coronavirus has infected over 4.48 million people and claimed over 300,200 lives around the world. However, out of those infected, 1.68 million people have recovered.