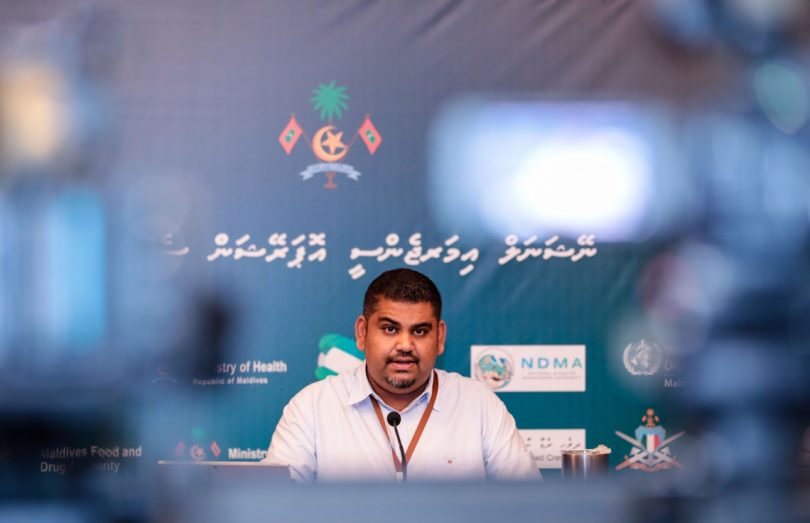 National Emergency Operations Centre (NEOC) revealed that a total of 94 COVID-19 patients made a full recovery in the 24hrs prior to 1800hrs on Sunday, while only 22 new cases were identified within the same duration.

According to the Health Protection Agency (HPA), the foreigners include nine Bangladeshis, two Nepalese, one Indian and one Thai national. Eight of these individuals are connected to identified clusters, while the remaining five are independent cases.

Confirmed an additional 22 cases of COVID-19 infections in Maldives

Mabrouq confirmed that six out of the nine locals that tested positive were linked to pre-existing clusters, while three are stand-alone cases.

He further revealed that one of the locals included an “83-year-old woman with hypertension and chronic illnesses in addition to other underlying conditions”, who remained more susceptible to complications.

“Currently, eight patients are receiving treatment at Hulhumale’ Medical Facility”, Mabrouq said, adding that they were all being treated at the ward.

Noting that six patients were also receiving similar treatment at Tree Top Hospital, Mabrouq confirmed that two additional individuals were treated at the Intensive Care Unit (ICU), but assured that both were in stable condition.

Mabrouq went on to note that over 761 samples were collected within the past 24hrs, of which 29 were collected from flu clinics. A total of 556 residences remain placed under monitoring in relation to identified virus cases.

Moreover, he disclosed that 295 individuals were released from quarantine facilities on Sunday, after testing negative for the virus.

With these new developments, Maldives presently records a total of 2,035 confirmed cases of COVID-19, of which 714 are active cases. The country records 1,3111 recoveries and eight deaths.

WHO has classified the spread of COVID-19 as a global pandemic. The new strain of novel coronavirus has infected over 7.9 million people and claimed over 433,933 lives around the world. However, out of those infected, 4 million people have recovered.