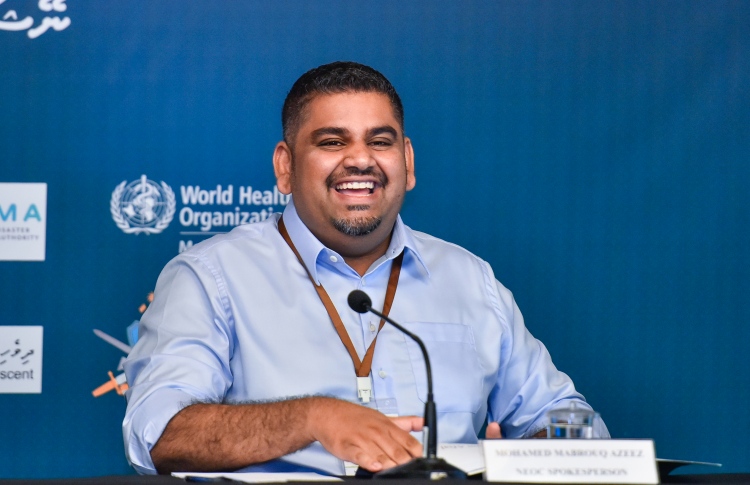 Authorities confirmed on Tuesday night that, following treatment, two individuals have recovered from the COVID-19 virus.

Speaking at the press briefing held by National Emergency Operation Centre (NEOC), President’s Office Undersecretary Mabrouq Abdul Azeez stated that this new development brings the total number of recoveries in the country to 20.

However, Mabrouq also stated that a total of six COVID-19 patients are currently receiving treatment at the DH11 critical care facility established in Dharumavantha Hospital.

The patients include two elderly males, aged 70 and 88, who are currently put on ventilators, in addition to another patient on supplemental oxygen.

Referring to graphs, Mabrouq stated that the number of daily cases is following a low trend as of now, although it is still higher than the projections for a compliance level of 75 per cent, which authorities are aiming for.

Till date, Maldives recorded the highest number of daily cases on May 1, with 179 individuals testing positive for the virus. Since then, the numbers have remained significantly lower, with 22 new cases being identified on Tuesday.

Despite the low numbers, Dr Afzal warned that the number of individuals that test positive for the virus in the upcoming days may increase, based on the recent confirmed cases.

The country currently records 573 confirmed, 553 active cases of COVID-19 and a total of 20 recoveries.

The country recorded its first virus death, of an 83-year-old local female, on April 29. The second death involved the passing of a 33-year-old male Bangladeshi national, following a tonic-clonic seizure, that afterwards tested positive for COVID-19.

The disease has also disproportionately affected the country’s large expatriate population, the majority of whom are Bangladeshi nationals and live in highly congested quarters where it is impossible to reduce contact or exercise social distancing.

The World Health Organization (WHO) has classified the spread of COVID-19 as a global pandemic. The new strain of novel coronavirus has infected over 3.6 million people and claimed over 255,715 lives around the world. However, out of those infected, 1.2 million people have recovered