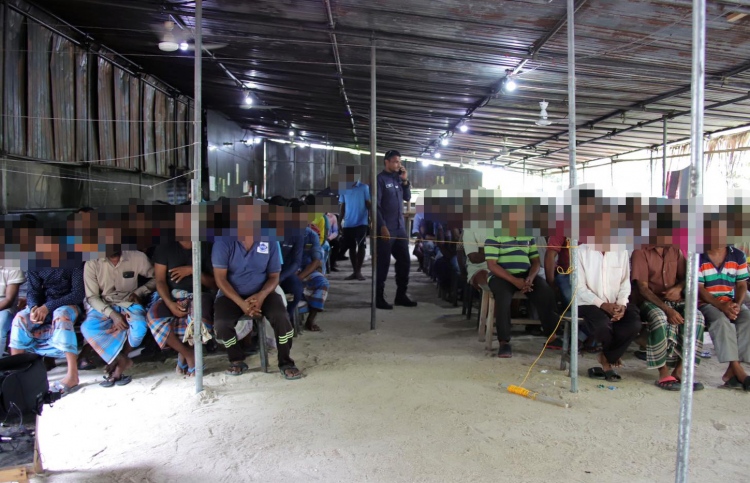 Legal representatives of the expatriates submitted a case to the Criminal Court, requesting a writ of habeas corpus on the basis that the workers were being illegally detained at a facility located in the reclaimed suburb of Hulhumale’.

A habeas corpus requires the judge to bring the suspect charged with a crime to the courtroom, often to secure the individual’s release unless lawful grounds for the detention are presented.

The Criminal Court rejected the request, asserting that the expatriates were being detained for violating immigration laws and not for committing a criminal offence. The court also clarified the legality of the situation by highlighting that provisions regarding administrative custody are included in the Immigration Act.

Additionally, the court’s response stated that it could not order the release of the 19 expatriates as they do not hold valid passports and no entity is prepared to take responsibility for them.

Furthermore, the presiding judge, Adam Mohamed, noted that the Criminal Court did not have the jurisdiction to review decisions made by state institutions, including Maldives Immigration.

The detainees were transferred from police custody to the Hulhumale’ Detention Centre under the jurisdiction of Maldives Immigration on August 3.

According to the statement by the expats’ legal team, police released them from custody because no charges were filed against the workers within the lawfully allocated time frame.

The state assumed custody of the migrants remaining on the island after RIX Pvt Ltd refused to claim responsibility for the workers citing misidentification of the company, dodging an order issued by the Thulhaadhoo Magistrate Court for RIX to extradite the expatriates from Bodufinolhu as per a request from Seal Maldives.