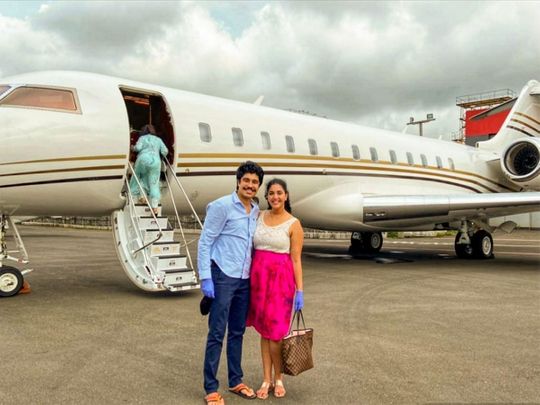 Dubai: Dubai-based Ria and Rohan Bhatia, who flew to the Maldives for their honeymoon on March 13 but remained stranded there for over three months amid COVID19-related flight suspensions, are finally back home.

The newly-weds told Gulf News that they arrived in a business charter from Mumbai along with 12 others on June 25, after a gruelling 105 days away from home.

“With each day of our stay weighing upon us, we took a direct flight to Mumbai on June 11, completed our 14-day quarantine and then arranged a business charter to fly back to the UAE last Thursday,” said Rohan, a trade development executive.

He said the trip was not without its share of challenges though.

“First of all, although there were ships repatriating Indians stuck in the Maldives, we could not take them as my wife is a Canadian passport holder. So we waited and took a direct flight to my native place Mumbai once they started letting OCI holders in,” said Rohan.

Now stuck in India, the couple who were serving their quarantine period, were exploring ways to come back to the UAE when they realised that there were many others like them in Mumbai.

“We learnt that business charters from the UAE were bringing back Indians to the UAE and wanted to avail one such service. But we knew we could not do it alone. So we started a social media group to see if there were others who would be interested. Within no time, the group had around 200 people, but not all of them were convinced about the idea. We needed 12 more people for a 14-seater business charter and we somehow managed to bring them on board,” said Rohan.

The couple said the tickets did not come cheap and they had to cough up around Dh10,500 per head for their return. “But all that mattered to us was to come back home.”

When Gulf News reported on their extended honeymoon in the Maldives on April 10, Ria had said, “Everyone’s been telling us how lucky we are to be on an eternal honeymoon on a dream island, which also happens to have only a few cases of coronavirus. But truth be told, it feels like the honeymoon is long over because we are very anxious to return home.”

With the idyllic resort, they were in suspending all leisure activities as a COVID-19 precautionary measure, the couple had said there was only that much they could do to keep occupied.

“It’s safe to say we’re done with the beaches. We exhausted the water sport options well before the restrictions came into place,” Ria had said, longing for the comfort and familiarity of her country of residence.

The couple said they are hugely relieved to be back home with their families now. Both have tested negative for coronavirus upon their arrival, they added.