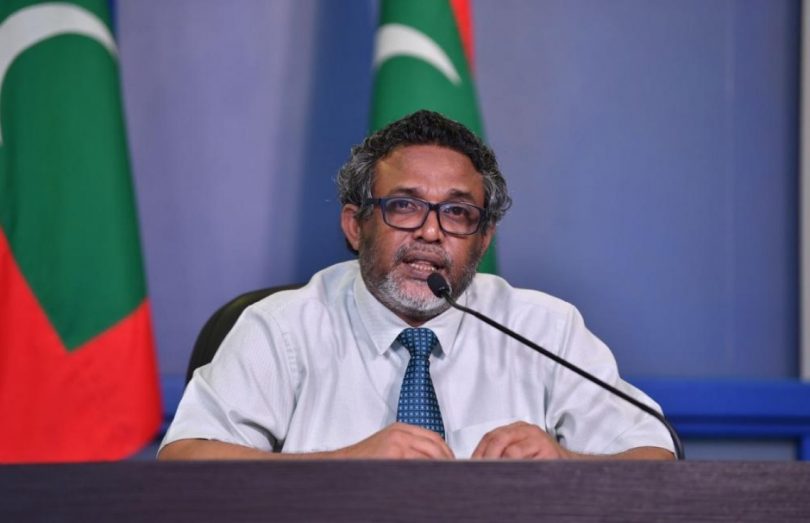 The largest corruption case recorded in Maldives’ history, the MMPRC scandal, involved the embezzlement of millions in state funds, which were acquired through leasing islands and lagoons for tourism development.

Earlier reports of the MMPRC graft, publicised by the Anti Corruption Commission and the Auditor General’s Office, placed the loss at USD 77.5 million (MVR 1.3 billion).

Speaking at Thursday’s press conference hosted by the Presidential Commission on Corruption and Asset Recovery, the commission’s President Ahmed As’ad disclosed that the investigation identified a potential loss of USD 142.5 million (MVR 2.1 billion) in state funds, in addition to the aforementioned USD 77.5 million (MVR 1.3 billion).

He attributed the considerable loss to MMPRC’s leasing of 37 islands to private parties at below-market prices.

According to As’ad, the calculated loss does not include the potential revenue that would have been generated through leasing the 12 lagoons, as the Maldives did not have a policy on pricing lagoons for tourism development, at the time of the embezzlement.

If the revenue generated through lagoon leasing were taken into account, As’ad speculated that the total loss of the scandal may exceed MVR 4 billion.

What is taking so long?

In Thursday’s press conference, As’ad revealed that the number of individuals implicated in the scandal has now almost reached 300, adding that this number may increase in the future as investigations proceed.

Initial reports by ACC stated that 155 individuals had benefitted from the MMPRC graft — a number that later increased to 267.

Authorities confirm that the 300 or so suspected individuals include high-ranking officials from the incumbent and past administrations, in addition to parliament representatives, judges, members of independent bodies and officers of law enforcement.

As’ad noted that the commission lacked the capacity and human resources to investigate 300 suspects all at once.

Therefore, he explained that the commission was conducting the probe in batches, prioritising the investigation of certain individuals based on the amount of embezzled funds linked to them, the evidence gathered by authorities, and the influence of their positions.

He stated that the commission, along with Maldives Police Service and ACC, was currently carrying out joint investigations into the top 30 individuals, of which five will be prosecuted within the upcoming weeks.

Declining to name any of the suspects implicated in the fraud, As’ad maintained that the information will be publicised when the Prosecutor General’s (PG) Office presses charges.

As’ad also noted other challenges impeding the investigation, such as the difficulty in acquiring financial documents and relevant statistics, adding that the data collection system in the Maldives was inadequate.

Moreover, As’ad admitted that there was room to believe that some data had been deliberately erased by certain institutions.

Since a lot of embezzled funds were converted to cash, As’ad stated that following the money trail was a complicated matter as well.

Further explaining the delay, As’ad said that rushing the proceedings and forwarding a case to court with an “incomplete investigation” essentially amounts to “saving someone who is implicated”.

“We also have to prove all of this”, he said, adding that just gathering the information does not amount to evidence.

As’ad assured that despite delays, the ongoing investigations will generate satisfactory results if the proceedings are thorough.

According to the asset recovery commission’s president, the MMPRC graft was either directly or indirectly supported by the system in the Maldives, including branches of the government, banking institutions, and watchdogs.

He noted that such high-profile embezzlement could not have been organised unless the entire system was enabling it, noting that none of the criminal activities was flagged by any relevant institutions at the time.

“This happened due to a total failure of the system”.

Furthermore, he declared that the investigation confirmed that the previous government had leased islands and lagoons through MMPRC unlawfully.

As’ad described that the state had conducted a joint-venture with MMPRC to contract islands and lagoons for resort development without a bidding process, by utilising an exceptional circumstance listed in the legislation.

He explained that the aforementioned process can only be carried out in case of market failure, in the instance that projects do not receive any bids for an island, despite repeated tenders by the government.

As’ad stated that this exceptional circumstance had been manipulated as a “loophole” to override the bidding process and organise the graft by using state-owned enterprises (SOEs) as a front for the embezzlement.

Citing multiple flaws in the system, As’ad described the MMPRC scandal as a repetition of history, although he did not specify which part of history he was referring to.

However, he did suggest measures to prevent similar cases of fraud, such as reducing cash in financial transactions, especially of large amounts. This will make the funds easier to trace in case of suspicion, As’ad said.

Stressing that illicit enrichment has yet to be criminalised, the commission’s president described that, presently, there was no way for authorities to confiscate a questionable asset until a conviction is reached.

Noting that the nature of theft and robbery was evolving to complex graft and embezzlement cases, As’ad emphasised the importance of systems and institutions to strengthen their ability in tackling such incidents.

Moreover, As’ad noted that “ethical standards” must be the main point of consideration when appointing individuals to public office, despite how trained or educated they may be.

As’ad concluded the press conference requesting the public to be patient and supportive of the investigation as much as possible, adding that the allegations and information shared on social media were helpful to the probe,

He guaranteed that suspects will be prosecuted only with a sufficient amount of evidence, without bias or influence.

Till date, only former President Abdulla Yameen Abdul Gayoom has been convicted over-involvement in the MMPRC scandal. He is currently serving five years in jail, along with a fine amounting to USD 5 million.

Former Vice President Ahmed Adeeb, who was the tourism minister in Yameen’s administration at the time of the scandal, was also previously convicted in connection with MMPRC. Although all charges against Adeeb were recently dropped by the Criminal Court in a controversial move, the High Court has commenced the appeal against Adeeb and remanded him until the end of his trial.

The then-managing director of MMPRC, Abdulla Ziyath, also faces criminal charges over the embezzlement. He is presently under house arrest while his trial is still ongoing.

Although the presidential commission has been investigating the MMPRC scandal for more than a year, the commission is yet to disclose details on any other case under investigation.