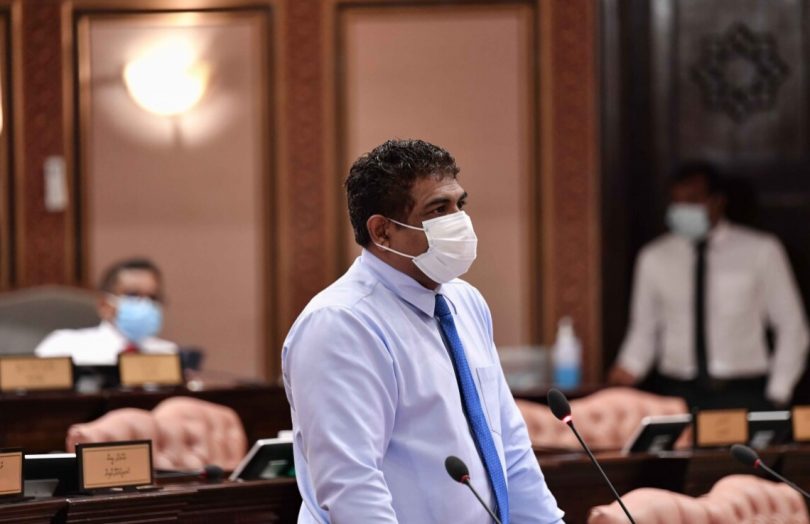 According to the amendment, if a cabinet member of a coalition government is removed over allegations of corruption and sexual assault or other crimes, whichever party the minister was representing would lose that seat.

Rasdheed’s amendment states that a seat vacated under this circumstance can only be replaced by an individual belonging to a party listed on the Elections Commission’s political party registry with at least 50,000 members.

Of the four coalition parties in the current administration, MDP is the only party which fits the aforementioned criteria with over 54,000 members.

Voting for MP Ibrahim Rasheed’s amendment will take place during MDP’s congress. However, the party has yet to announce the date when the congress will commence.

If the amendment passes, any vacated slot in the cabinet formerly granted to a coalition party will be replaced with an MDP member.

At the time of submitting this proposal, President Solih has dismissed the former Minister of Tourism Ali Waheed, who was appointed on Jumhooree Party’s slot, over allegations of sexual assault. JP’s Dr Abdulla Mausoom has now been appointed as Ali Waheed’s replacement.

Prior to this, Shidhatha Shareef who was appointed as Minister of Gender, Family and Social Services for Adhaalath Party’s slot and Aiminath Athifa who was filling the position of Minister of Housing and Infrastructure for MRM’s slot, had both resigned.

President Solih then appointed Aishath Mohamed Didi, who is not registered at any party, as gender minister.

Due to the aforementioned amalgamation, MRM has already lost a slot appointed to the party within the cabinet.

According to MP Ibrahim Rasheed, the amendment aims to increase the involvement of bigger parties within the state, in order to “solidify the democracy in the Maldives”.

Noting that the current situation forces qualified and dedicated individuals away from the scene of action, Ibrahim Rasheed claimed that the president lacked the opportunity to appoint suitable candidates for vacated seats.

“The president plays the role of a postman who forwards the name submitted by some party to the Parliament”, he said, reiterating that the president must have full freedom to appoint ministers.

Defending the possibility that MDP stands to acquire all the cabinet slots following the proposed amendment, Ibrahim Rasheed shot back that “the coalition is filled with corruption and conflict”.

“The administration is not functioning well. The people are saying that MDP should take responsibility [for every failure].”

Acknowledging that the public’s anger stems from the fact that MDP was voted into power with a super-majority in Parliament, Rasheed stressed that a coalition government is not beneficial for the country.

He highlighted the shortcomings of the housing ministry to justify the aforementioned point, claiming that Athifa had failed to provide the numbers of homeless people in the Maldives during her one and half years of filling the ministerial position.

However, the public’s criticisms have been aimed at ministries that are headed by MDP members as well, and the Solih administration in general. The government came under heavy fire over its failure to ensure justice for survivors of gender-based violence and child abuse.

Although Ali Waheed was swiftly removed from his position after the sexual assault allegations, the state was not as responsive towards Ali Hashim ‘Smith’, a senior executive at the tourism ministry who openly suggested via Twitter, that he ‘rape’ a girl. The MDP activist was formerly named in a murder investigation and holds zero qualifications for his post but no action has been taken against him to this day.

On July 20, MRM member and Director of Communications at Ministry of Fisheries, Marine Resources and Agriculture Ahmed Fazeel was suspended a day after accusations of sexual assault surfaced against him, reportedly spurred by an appeal from his party, till the conclusion of his investigation.