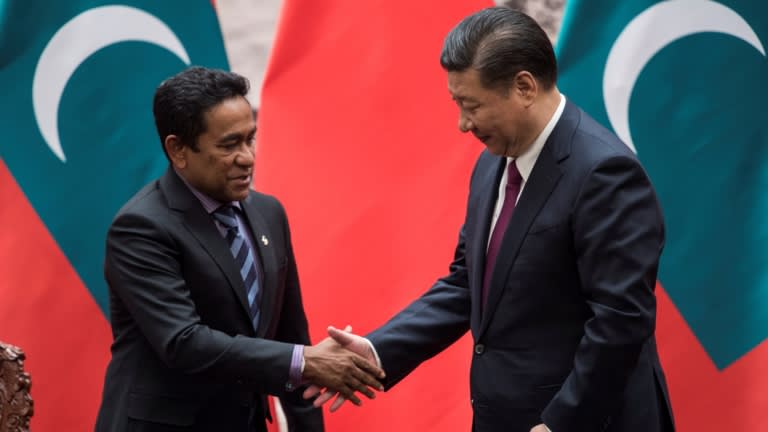 COLOMBO — When Ahmed Siyam, a Maldivian business magnate, rushed to service a $127.5 million loan he had received from the state-owned Export-Import Bank of China, he eased fears in the Indian Ocean archipelago about the Maldives falling into a Chinese debt-trap. But the August repayment reminded many of the risks of carrying billions of dollars in Chinese credit shrouded in secrecy.

China’s EXIM Bank had put the Maldivian government on edge in July by issuing a notice to Sun Siyam, as the businessman is better known, to repay $10 million of the loan by early August. Siyam’s company, Ahmed Siyam Holdings (ASH), had reportedly failed to come up with the amount at that time.

The Chinese bank had the government of President Ibrahim Mohamed Solih just as much in its sights, calling on the state to settle the debt if Siyam defaulted. EXIM Bank was able to make such a demand because its loan to the private Maldivian company was backed by a sovereign guarantee, the first of its kind.

“ASH had an interest payment, a repayment and commitment fees due in July,” a senior official from President Solih’s office told the Nikkei Asian Review. “Since ASH was unable to service the debt on the due date, the government as guarantor was asked to repay it.” The official said that if ASH had defaulted, the government would have been forced to pay instead under the terms of the agreement.

China’s squeeze on both the businessman and the government was unprecedented in the strategically located South Asian country, and seasoned observers of South Asia quickly flagged it as a warning to other countries in the region.

Abdulla Yameen, the former president of the Maldives, left, was feted in Beijing by President Xi Jinping in late 2017 — and sent to jail in 2019 for money laundering.    © Reuters

EXIM Bank’s firm handling of the ASH loan has stirred memories of the murky terms on which China doled out loans to the Maldives when President Abdulla Yameen was in office. His authoritarian five-year term ended in 2018 and was noted for its cosying up to China. Yameen was jailed in late 2019 for money laundering activities tied to the country’s lucrative tourism industry.

Exim Bank struck its deal with Siyam in early 2016 to build the largest resort in the country, and Wang Fukang, China’s ambassador to the Maldives, attended the signing ceremony. However, the Chinese embassy in the capital Male has only ever posted very general details of the project on its website.

When the loan was extended to Siyam, he was a member of parliament and backer of Yameen’s ruling coalition. It was part of $1.4 billion that the Maldives officially owes China. Outspoken political allies of Solih believe the debt is actually higher — closer to  $3.5 billion in a $5 billion economy, but the Chinese government refutes this.

Transparency Maldives, the country branch of Transparency International, a global anti-corruption organization, regards the loan as a corollary to the political bond between Yameen and Siyam. “The loan to Siyam and the sovereign guarantee must be considered with the following fact: Siyam’s party was in coalition with Yameen’s party and was a staunch supporter of Yameen’s policies,” Asiath Rilweena, executive director of Transparency Maldives told Nikkei. She described the deal as “pretty unusual” given that it is the only instance of a sovereign guarantee being provided for a loan to a private entity.

Shortly after his 2018 election, Solih ordered an investigation into financial dealings during the Yameen years, including loans from China. Investigators attached to the Presidential Commission on Corruption and Asset Recovery are still sifting through documentation due to the “complex nature of the cases,” a government source told Nikkei. 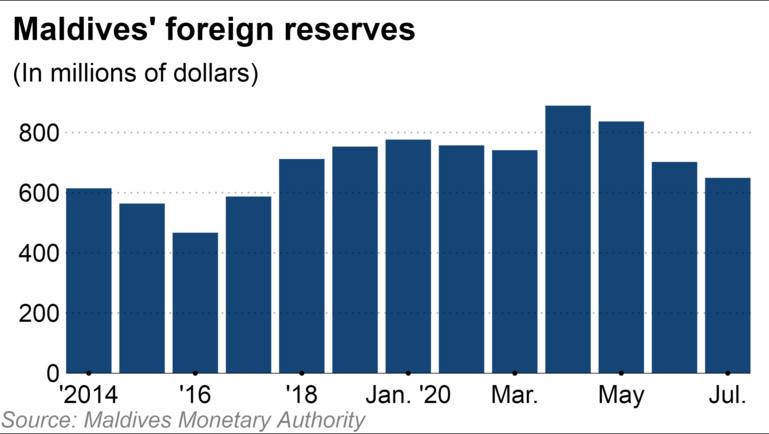 Information that has trickled out this year hints at what might lie in store. According to media reports citing finance ministry data, Chinese loans to Maldivian state-owned companies backed by sovereign guarantees were estimated to total $935 million. Beneficiaries included the Housing Development Company, a state concern involved in a high-rise housing project. Beijing has reportedly lent another $600 million to the Maldivian government.

Funds from Beijing’s Belt and Road Initiative (BRI) paid for construction of a bridge linking Male to the main airport located on another island. BRI also funded expansion of the airport and upgrading the electricity grid, among other infrastructure projects. The construction spree took off after President Xi Jinping visited in 2014, the first time a Chinese leader came to the Maldives.

Seasoned financial analysts in the Maldives told Nikkei that there is no cause for undue alarm over the Chinese debt portfolio. “Getting grants and concessional financial support from friendly sources is a necessary practice,” said Fazeel Najeeb, the former governor of the Maldives Monetary Authority (MMA), the central bank. “Such arrangements are formal and it is necessary for all parties to such an arrangement to perform their obligations at the time they are due.”

The pressure on the Maldives to meet its international debt obligations has come to the fore as it grapples with an economic downturn from the impact of the COVID-19 pandemic, which has choked off tourism, the primary foreign exchange earner in this country of 400,000 people who inhabit 198 of its 1,190 islands.

In 2019, the Maldives attracted a record 1.9 million high-spending holidaymakers. It only pulled in 384,548 tourists this year up to July, a 61% drop year on year. The situation deteriorated in the second quarter after the Maldives closed its airport from mid-March to mid-July as the pandemic spread. 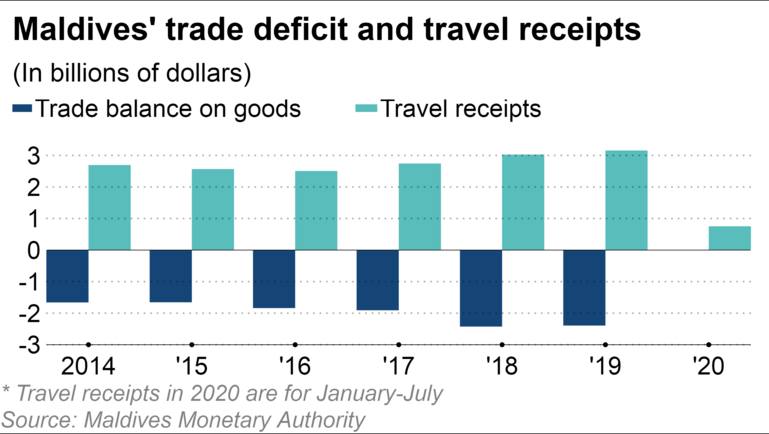 In March this year, Fitch Ratings downgraded the Maldives from B+ to B, changing it to a “negative” outlook from “stable.” The global rating agency said “a deep recession seems unavoidable” given that tourism accounted directly for 25% of gross domestic product, and more indirectly. Moody’s, another global rating agency, was also gloomy, downgrading the Maldives in May from B2 to B3 with a “negative outlook.”

The Maldives must settle $117 million in external debt and interest by the end of this year. According to data released by the MMA, foreign reserves stood at $649 million in July. But Thomas Rookmaaker, sovereign rating director at Fitch Ratings, told Nikkei that reserves net of short-term liabilities — which could be used to repay loans — stood at only $156 million in July, down from $311 million in January.

Rookmaaker said, “risks are skewed to the downside given the limited external buffers.” He said the rating agency expects “the Maldives to continue to benefit from financial support from its multilateral and bilateral partners.”

India has already stepped in to help alleviate its tiny neighbour’s debt burden. It provided a $1.4 billion financial aid package in December 2018 as part of New Delhi’s efforts to regain influence in the country after the China tilt in the Yameen years.

“The government has prioritized its debt servicing obligations,” the senior official from the president’s office told Nikkei. “This includes utilizing funds we received in 2018 and 2019, securing additional financing on concessional rates, revising our expenditure, and working with our international partners.”