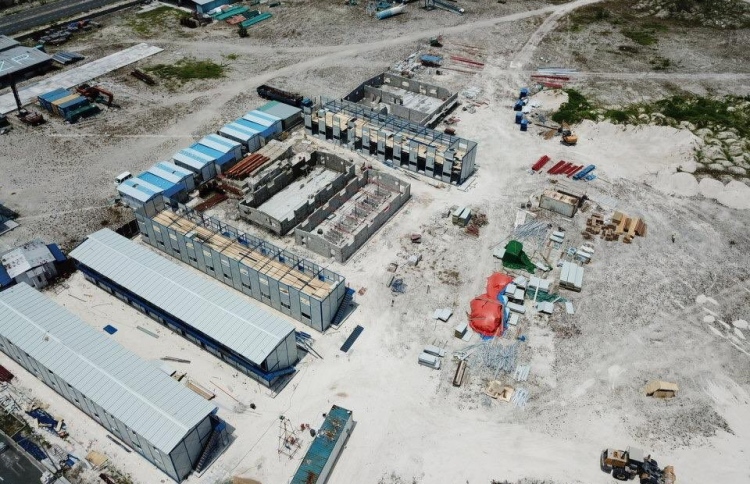 Chinese Ambassador to Maldives Zhang Lizhong on Wednesday revealed that Chinese businesses would collectively have provided over MVR 4 million (USD 280,000) in aid, after the ongoing construction of expatriate labour quarters built on Phase Two of the reclaimed suburb Hulhumale’, concludes.

The project in Hulumale Phase II will complete on May 18th. 200 staff from CSCEC are working on the site. It is estimated CSCEC will contribute labor force, materials and equipment worthy of $280,000 upon completion. https://t.co/oW7n5G3P2u https://t.co/RoDiOIRbU7 pic.twitter.com/jmzbJLNzFS

According to the infographic tweeted by the Ambassador, already 68 per cent of the project is complete, and overall construction was presumed to conclude by May 18.

The Ambassador disclosed that the aid was provided following a request issued from the Maldivian government and that efforts were underway to complete the task as quickly as possible, in a “race against time”.

The facility will be segregated into a total of 6 blocks, including a mess hall and two toilet blocks.

To support the effort by the Gov. of Maldives to combat COVID19, CCCC has provided to HDC some plank materials enough to build 10 mobile houses, and upon request from relevant gov. agency, processed 101 sets of beds used in hospital. pic.twitter.com/vR6EQejN5z

Till date, China has collectively donated the following anti-pandemic materials to the Maldives:

Appreciating the help offered by China during these trying times, Minister of Foreign Affairs thanked the Chinese President Xi Jinping, State Councilor and Foreign Minister Wang Yi and the Chinese Ambassador Lizhong, for their kind consideration towards the Maldives, despite the toll of the COVID-19 pandemic on China.

The government on May 2, announced plans to relocate high-risk expatriate workers from 23 accommodation blocks as a measure to reduce the community spread of COVID-19.

As per the announcement made by the Director-General of Public Health Maimoona Aboobakur, an order was issued to place all high-risk workers in the Greater Male’ region under quarantine, in facilities allocated by NEOC.

The country recorded its first virus death, of an 83-year-old local female, on April 29. The second death involved the passing of a 33-year-old male Bangladeshi national, following a tonic-clonic seizure, who afterwards tested positive for COVID-19.

The World Health Organization (WHO) has classified the spread of COVID-19 as a global pandemic. The new strain of novel coronavirus has infected over 3.7 million people and claimed over 258,840 lives around the world. However, out of those infected, 1.2 million people have recovered.