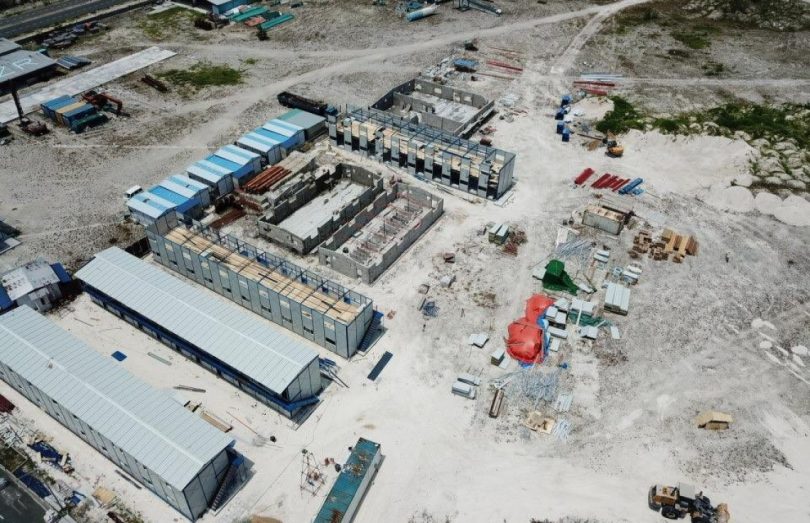 The government of China on Monday handed over the finished expatriate quarantine facility built on Phase Two of the reclaimed suburb Hulhumale’, to Housing Development Corporation (HDC).

The facility is segregated into a total of 6 blocks, including a mess hall and two toilet blocks.

Completed in a total of 22 days and with Chinese businesses reported to have collectively provided over MVR 4 million (USD 280,000) in assistance to build the facility, the Ambassador disclosed that the aid was provided following a request issued from the Maldivian government and that efforts were completed in a “race against time”.

The government on May 2, announced plans to relocate high-risk expatriate workers from high-risk accommodation blocks as a measure to reduce the community spread of COVID-19.

As per the announcement made by the Director-General of Public Health Maimoona Aboobakur, an order was issued to place all high-risk workers in the Greater Male’ region under quarantine, in facilities allocated by NEOC.

The total number of recoveries recorded in the Maldives reached 86, while the number of positive cases currently stands at 1,143, with 1053 cases that are active. The country has also recorded four fatalities.

The capital city of Maldives, Male’, one of the most densely populated cities in the world has recorded a significant increase in COVID-19 since recording its first local transmission of the virus on April 15, involving a Maldivian woman who sought assistance from a flu clinic in Malé after developing symptoms for the virus.

WHO has classified the spread of COVID-19 as a global pandemic. The new strain of novel coronavirus has infected over 4.98 million people and claimed over 324,996 lives around the world. However, out of those infected, 1.95 million people have recovered.