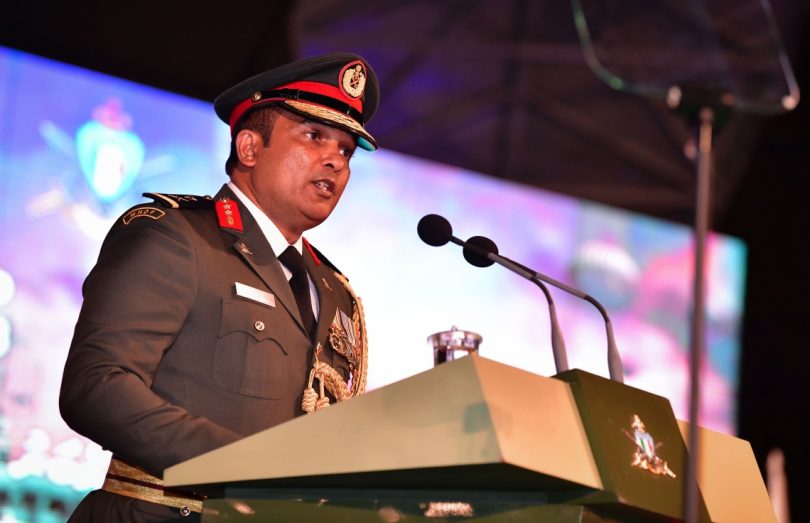 Chief of Defence force Major General Abdulla Shamaal, on Sunday, asserted that no foreign armed forces are present in the Maldives.

He made this statement at a time that public criticism is high, regarding reports that Indian military personnel will soon arrive at Hanimaadhoo in Haa Dhaalu Atoll, in addition to the Indian officers that are already in the Maldives to operate the helicopters gifted to Maldives National Defence Force (MNDF) by the Indian military.

During a press conference held by senior officers of MNDF, Shamaal described a military presence as armed officers with ulterior motives.

Repeatedly denying such a presence in the Maldives, Shamaal stated that “technicians, technical personnel serving humanitarian purposes [and those] aiding us and fulfilling our needs are working in the Maldives”.

For example, he explained that foreign personnel are currently operating the helicopters gifted from India, as local pilots specialised in the field are unavailable.

However, he noted that some of the existing pilots will be given the proper training to operate the helicopters in the near future.

According to Shamaal, Indian officers have been overseeing the maintenance and refuelling of the helicopters, as stated in the agreement. Coast Guard vessels also go to India once every two years for a refit, he noted.

“[MNDF has] their command and control. The helicopter travels from one place to another under MNDF’s instructions”.

Since the Indian Ocean is an important territory, Shamaal added that the United States, Saudi Arabia, China, Pakistan and the United Kingdom also provides military aid to broaden the capacity of Maldivian armed forces.

Highlighting that “the military will not allow for anything to jeopardise Maldives’ freedom”, Shamaal added that MNDF will preserve the Constitution and the freedom of the island nation.