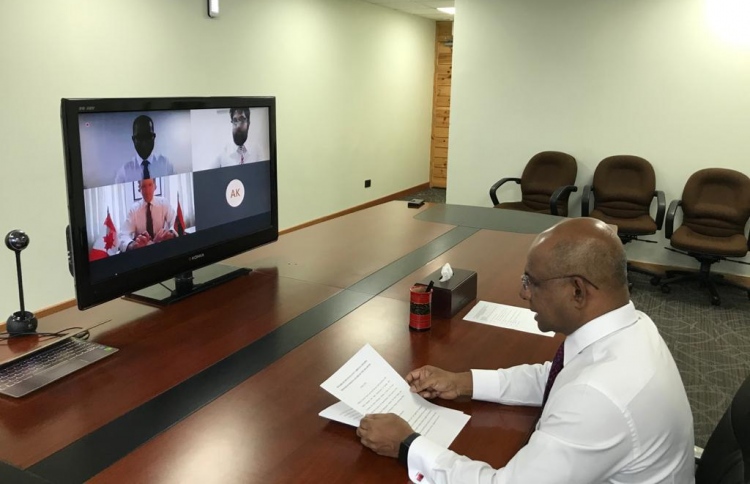 Canada on Monday extended CAD 100,000 (over MVR 1 million) to the Maldivian government, to provide basic services to the homeless and vulnerable communities in capital Male’ impacted by the COVID-19 pandemic.

According to the foreign ministry, the funds were issued through the Canada Fund for Local Initiatives, for the project titled ‘Shelter and provision of basic needs for the homeless and vulnerable communities impacted by COVID-19 in Male’.

Canadian High Commissioner @McKinnonDavid and I signed agreement for MVR 1 million to support Govt in providing basic services to the homeless and vulnerable communities in Male’. I thank Foreign Minister @FP_Champagne and Govt of Canada for this timely assistance. pic.twitter.com/eHOzj8JB9W

The project, to be implemented by the Ministry of Gender, Family and Social Services, will directly support 400 vulnerable individuals and increase the government’s capacity to provide assistance to those in need.

Foreign Minister Shahid thanked his Canadian counterpart François-Philippe Champagne and the International Development Minister of Canada, Karina Gould, for Canada’s assistance to the Maldives, declaring it “yet another example of solidarity that Canada is always known for; caring for others, especially the most vulnerable when such care is most needed”.

High Commissioner McKinnon praised the Maldivian government’s efforts in supporting vulnerable populations amid the pandemic and stated that the Canadian government was pleased to support the timely delivery of essential supplies and services to vulnerable communities and individuals in the island nation.

Amid the ongoing lockdown in the Greater Male’ region in effect, since April 15 to contain the spread of COVID-19, authorities have placed a number of homeless people from the capital in temporary shelters. With the combined efforts of the gender ministry, Maldives Police Service and Maldivian Red Crescent, the administration is providing identified homeless persons and other vulnerable individuals with basic needs, including food during the ongoing Islamic fasting month of Ramadan.

Male’ City Council has urged any homeless and forcefully evicted individuals in the capital to inform the gender ministry via its hotline ‘1412’. The government has also appealed against the eviction of tenants over failure to pay rent due to the fiscal and economic crisis resulting from the COVID-19 pandemic.

The Maldives currently records 1,094 confirmed cases of COVID-19 with 1,031 active cases, 59 recoveries and four fatalities. Capital city Malé, one of the most densely populated places in the world, has recorded a significant increase in COVID-19 cases since recording its first local transmission on April 15.

The World Health Organisation (WHO) has classified the spread of COVID-19 as a global pandemic. The new strain of novel coronavirus has infected over 4.8 million people and claimed over 316,900 lives around the world. However, out of those infected, 1.8 million people have recovered.