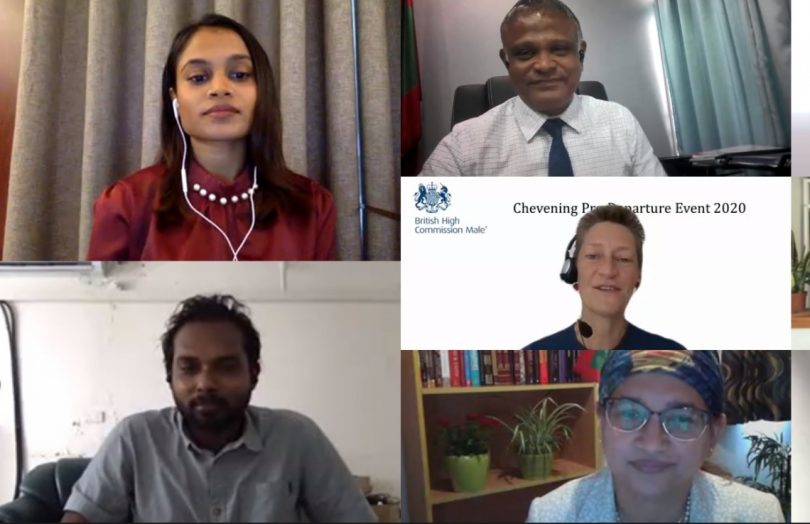 The British High Commission in the Maldives, on Sunday, hosted a virtual send-off for five Chevening scholars for the academic year of 2020-2021.

Congratulations #Chevening scholars of 2020/21! 🎉 Today we hosted a virtual send-off event for our scholars w/ Alumni, @DrFarahFaizal & @DrChubby who shared their experiences in the UK! Apply for 2021/22 #Chevening awards at: https://t.co/UtYHvBIHG4 pic.twitter.com/O18z4W5YQQ

In total, five applicants were selected from a pool of 75 applicants and will undertake their postgraduate studies from a range of subjects such as Law, Economics, Conflict Prevention and Peace Building, as well as Environment and Development.

This year’s application cycle also saw the highest number of scholars in a single year from which 65 per cent of applicants were female, reflecting the 3 out of the 5 scholars being female as well.

“I congratulate this year’s scholars on their achievement: competition is always fierce for these master’s opportunities at some of the UK’s top universities”, said the High Commissioner.

“I hope that COVID does not delay your arrival in the UK for too long and that you will have a great experience – not only in your studies and in who you meet, but in your spare time”.

Emphasizing on the importance of networking outside of the Maldivian community. High Commissioner Dr Faizal stated that all of “you are ambassadors from the Maldives, representing the Maldives in your universities. It is very important for them to know about you and you to know about them”.

As a result of COVID-19, some scholars will begin their courses in the Maldives. The British High Commission is also aiming to increase the number of annual scholarships in the coming year, as well as establishing an alumni group to further connect scholars and the global Chevening network.

There are two types of awards – Chevening Scholarships and Chevening Fellowships – the recipients of which are personally selected by British Embassies and High Commissions throughout the world.

Following the completion of their scholarship, alumni can apply for grant funding for projects via the Chevening Alumni Programme Fund.

Applications for the 2021/2022 Chevening Awards will remain open until November 3, while the application for mid-career journalists to apply for the Chevening South Asia Journalism Fellowship (SAJP) closes on October 19.