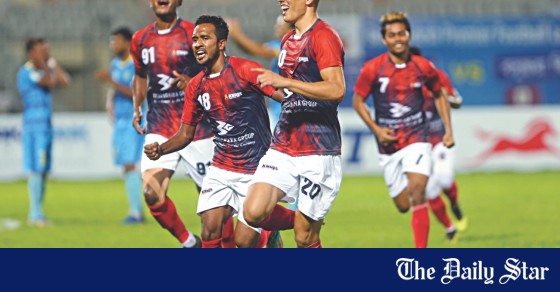 Bashundhara Kings will play their five remaining AFC Cup matches of Group E in the Maldives after the Asian Football Confederation reportedly awarded the island nation the hosting rights for the rest of the group fixtures.

According to various sources, Maldives was the only bidder for the hosting rights after the teams agreed to play the rest of the group matches at a single venue following the break due to Covid-19.

Bassam Adeel Jaleel, president of Football Association of Maldives, tweeted on Monday the news of their winning the hosting rights.

“Congratulations @MaldivesFA on being awarded to host the centralized @AFCCup Group E matches. In this crucial stage of the reopening of our borders, we can show that the Maldives is a safe destination through this. Expenses will be covered AFC & FAM,” the tweet said.

Bashundhara Kings, the Bangladesh champions, are on top of the group following a 5-1 win over Maldivian outfit TC Sports on Matchday 1 in March. India’s Chennai City and Maldives’ Maziya S&RC share the next position following a 2-2 draw between the two teams.

Bashundhara Kings and the three other teams will play five each of their remaining matches from October 23 to November 4. One team from the group will qualify for the inter-zone playoff semifinals.

The final of the tournament will be played on December 12 but a decision on the venue for it has not been taken.