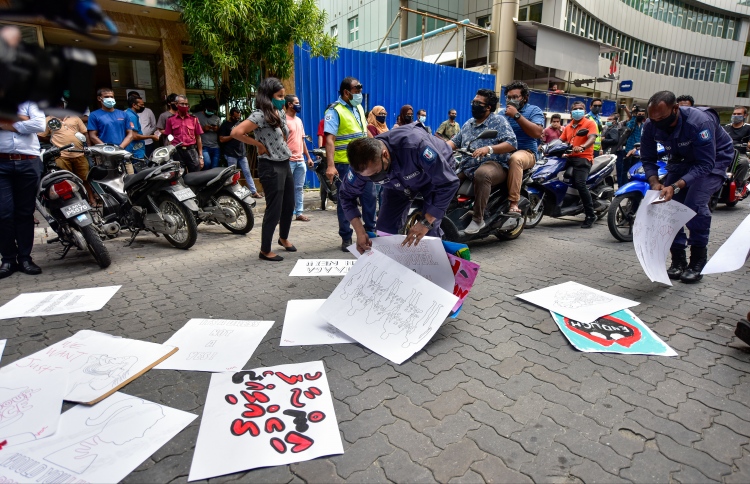 The Bar Council, on Thursday, called on the government to reverse the restrictions imposed on public gatherings and assemblies, declaring that the administrative order was in contravention of the Constitution and international obligations of Maldives.

In a controversial move that has drawn much ire and scrutiny, the Ministry of Home Affairs declared Tuesday that protests and all forms of public gatherings cannot be held without “prior written approval by Maldives Police Service”.

The order came after multiple protests were staged during the month of July, including marches by exploited expatriate workers demanding unpaid wages, child and women rights groups, as well as by the opposition coalition.

In a press release, the Bar Council highlighted that the home ministry’s declaration was made under Section 24 (f) of the Peaceful Assembly Act 2013, a contentious amendment ratified during former President Abdulla Yameen Abdul Gayoom’s administration in the wake of several protests held by the then-opposition and current ruling party.

As this amendment allows the Home Minister to impose a requirement to seek prior permission before exercising the right to assembly, the Bar Council declared it was in direct violation of Article 32 of the Constitution, which states, “Everyone has the right to freedom of peaceful assembly without prior permission of the State”.

Noting that under Article 18, the state is mandated to protect and promote all the rights accorded in the Constitution, the Bar Council further highlighted that restricting the freedom to assembly was in contravention to the Universal Declaration of Human Rights (UDHR) and the International Covenant on Civil and Political Rights (ICCPR).

The Bar Council also touched on the ministry’s decision to exempt only the carnival area in Henveiru ward of capital Male’ from the restrictions. They highlighted that, under the Principles on the Protection of Human Rights in Protests (2016), individuals are accorded the freedom to choose the location of protests in order to reach their intended audiences.

Hence, the Council concluded that the restrictions were unconstitutional and further called on the parliament to repeal Section 24 (f) of the Peaceful Assembly Act 2013.

The parliamentary representative for Kaafu Atoll’s Kaashidhoo constituency, MP Abdulla Jabir, had filed a motion to repeal the amendment in August 2019. The issue has not made any progress in the parliament till date.

The Bar Council’s statement came after the government staunchly defended the restrictions on the freedom of assembly on Wednesday night, maintaining that the order was issued within the framework of the Constitution.

Despite the government’s present stance on the issue, the ruling Maldivian Democratic Party (MDP) which was the main opposition during Yameen’s administration, had lambasted the amendment when it was first implemented, stating it was unconstitutional and in violation of the fundamental right to assembly.

In addition to the Bar Council, rights groups, activists, parliamentarians and other local entities, the international NGO Human Rights Watch has also slammed the government’s decision as a violation of fundamental rights.