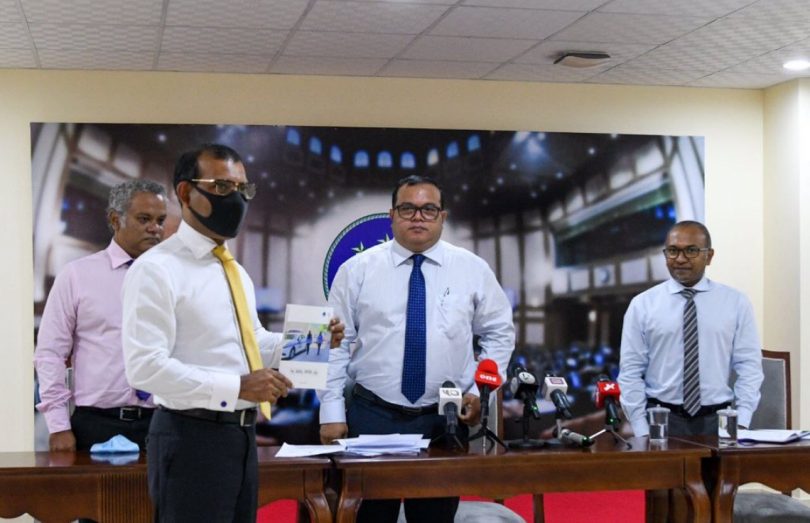 Attorney General’s Office (AGO) gave counsel to the Parliamentary Committee on National Security services, commonly known as 241 Committee, on Parliament’s draft of the new Police Bill.

Listing of conditions, under which police can conduct criminal investigations outside of Maldives, was also among the suggestions put forth by AGO.

In the event that a former officer wishes to be reinstated within 5 years of his resignation, AG Office requested the bill be amended to exempt the officer from having to re-do basic training programmes. However, AGO specified that the bill must make note of procedural guidelines on reinstating those who wish to join the security forces again.

If an officer dies in the line of duty, the state seeks to allot compensation amounting to 140 per cent of their salary and total allowances, to the officer’s family. Further, AGO advises extending the same allowances to the families of police recruits, if they are killed or injured in the line of duty.

The state advised the bill to include a new Chapter, to introduce an external review mechanism by establishing a Police Board. AGO states that the bill must highlight the board’s mandate and responsibilities, and clearly state that the board’s members will be appointed by the president.

With the introduction of this Chapter, AG Office noted that such a Police Board would give counsel on appointing the Commissioner of Police (CP), and therefore, the procedure of appointing a CP must be amended appropriately. The Police Board will also be tasked with interviewing all nominees for the position.

The state’s suggestions also push for the bill to mandate the Police Board with compiling reports based on the findings of both National Integrity Commission (NIC) and Police Professional Standard Command, then tasking the board with submitting the information directly to the minister.

AG Office’s counsel also called to specify that police may only use weapons under Section 45 of the Constitution, which declares that such allowances can be granted via an Act passed by the Parliament, within certain specified situations as per the stated procedures.

One advisory note from the AGO seeks to grant powers to the minister to summon and question individual high-ranking officers, to gather information on police operations.

AGO also pushed to transfer responsibilities held by 241 Committee to the Police Board that will be newly introduced by the bill, and reassign certain components under the committee’s mandate to that of the board.

Lastly, the AG Office advised on amending the relevant Chapter to change the formation of the Disciplinary Board based on the changes that will be brought to the procedures that are currently in place.

As it stands, the new Police Bill grants substantive authority to its Standing Committee on National Security Services. It states that the purpose of granting increased powers to the 241 committee is to ensure that the committee can exercise its vested oversight authority over Maldives Police Service (MPS) as stipulated in the Maldives constitution.

On June 22, the Progressive Congress Coalition, which consists of Progressive Party of Maldives (PPM) and People’s National Congress, protested in defence of Maldives Police Service. Led by PPM Council Member Ahmed Nareesh, protestors expressed concerns over parliament’s draft of the new Police Bill and called to remove such clauses that grant the committee various powers over police.