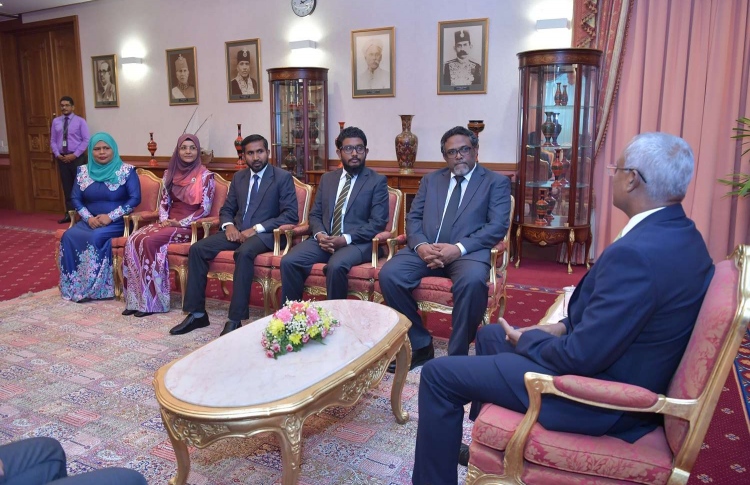 The Presidential Commission on Corruption and Asset Recovery turned in its official report to President Ibrahim Mohamed Solih on Thursday.

In a tweet, the president confirmed the submission and declared that he has mobilised the necessary action to be taken regarding the report’s findings. He did not disclose which cases the report concerned.

Following the handover, the commission held a news briefing to publicise its findings on the Maldives Marketing and Public Relations Corporation (MMPRC) scandal, the largest corruption case in Maldives’ history which saw millions in state funds, acquired through island and lagoon lease for tourism development, embezzled through the corporation.

The commission revealed that, although the reports previously compiled by the Auditor General’s Office and the Anti Corruption Commission (ACC) indicated that over MVR 1.3 billion were siphoned through MMPRC, the state suffered an actual loss of more MVR 4 billion in acquisition costs.

The Asset Recovery Commission previously presented its draft report to President Solih on March 5, 2020. At the time, the president had assured that the government would make every effort to recover the embezzled funds as soon as the commission finalised its report.

Till date, only former President Abdulla Yameen Abdul Gayoom has been convicted over the involvement in the MMPRC scandal. He is currently serving five years in jail, along with a fine amounting to USD 5 million.

Former Vice President Ahmed Adeeb, who was the tourism minister in Yameen’s administration at the time of the scandal, was also previously convicted in connection with MMPRC. Although all charges against Adeeb were recently dropped by the Criminal Court in a controversial move, the High Court has commenced the appeal against Adeeb and remanded him until the end of his trial.

The then-managing director of MMPRC, Abdulla Ziyath, also faces criminal charges over the embezzlement. He is presently under house arrest while his trial is still ongoing.

Although the presidential commission has been investigating the MMPRC scandal for more than a year, the commission is yet to disclose details on any other case under investigation.