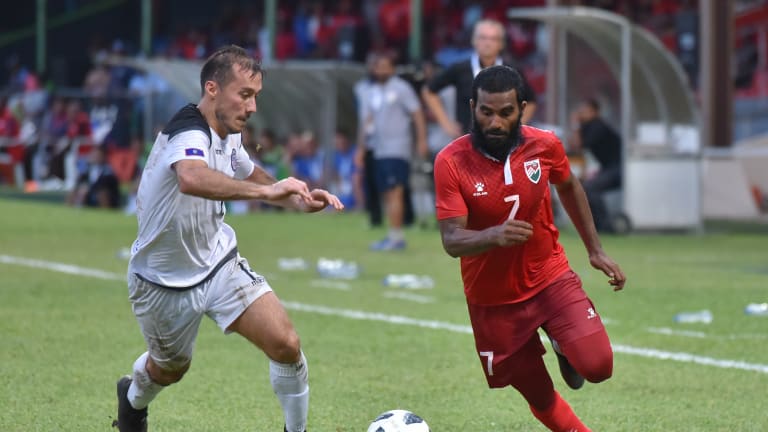 The Maldives are perhaps known globally for stunning coastal waters and luxury escapes. In the football realm, however, the island nation, with a population of less than half a million, remains an enigmatic force on the international stage.

It, therefore, came as a surprise when the South Asians were suddenly thrust into the global spotlight in 2013, when ace striker Ali Ashfaq was named the ‘World’s 2nd Best Top Goal Scorer’ of the year by the International Federation of Football History & Statistics (IFFHS).

With only goals in international and major continental club competitions taken into consideration, Ashfaq, with 23 such goals that year, trailed global leader Cristiano Ronaldo by just two but was five goals clear of Zlatan Ibrahimovic and eight clear of Lionel Messi.

For the first time in history, a player from the Maldives was being compared to the world’s top marksmen. The Maldives No7 managed to score 14 international goals that year, including a ten-goal haul as top-scorer at the 2013 SAFF Championship. At the club level, he struck nine times for New Radiant in the AFC Cup.

“It was indeed one of the best years of my career,” the 34-year-old told FIFA.com. “To be mentioned in the same breath as those great players were unbelievable for me. It was achieved through hard work by not only me but also the team-mates of the national team as well as New Radiant.

“At New Radiant, we had a great squad under an amazing manager in Velizar Popov. We won everything on the domestic front that year,” continued Ashfaq, who scored an incredible 44 goals in all competitions for the club that season. “We won the league title with an unbeaten record and we reached the last-eight in the AFC Cup.”

From street football to national star

For most observers, Ashfaq is the best footballer the Maldives has ever seen. It was, however, almost by accident that his love affair with the beautiful game commenced. Ashfaq was nine years old when his brother, Ashfan, played for a school team. There was a player missing one day and Ashfaq was asked to fill the void as a makeshift.

“That was how I started playing football and from there I began my football career,” he said recalling his early years. “I received my early training by playing with neighbouring boys – they are still my friends today and we hang out together occasionally. I was never an academy product.”

Despite his low-key background, Ashfaq maintained high hopes of a bright footballing future. In 2001, he was signed by local giants Valencia at the age of 16.

From there, Ashfaq began his remarkable journey as an unpolished diamond became the country’s scoring great. He exploded with the capital-based club scoring over a century of goals across four seasons, before stints at a series of clubs, including Malaysian powerhouses PDRM FA. For nearly two decades, Ashfaq has remained amazingly consistent and prolific in front of goal.

At the international level, Ashfaq has since scored 53 goals from 80 appearances in an 18-year international career, making him the country’s all-time top-scorer.

With exceptional speed, agility and technique, Ashfaq is renowned for his dribbling skills, and his penchant for taking the ball around opposition goalkeepers has become something of a trademark.

“Since I was young I have been obsessed with dribbling,” explained Ashfaq, a fervent Diego Maradona fan. “Dribbling past a goalkeeper gives me an added thrill and helps build my confidence as a forward.”

“I always wanted to surprise the rivals. I used to do everything with my left foot, but later I worked hard to improve my finishing with the right foot. I want to score using every means.”

His unique talents and outstanding form didn’t go unnoticed even by European giants with the likes of Benfica, Porto, Bursaspor all expressing interest. Ashfaq, however, rejected all these offers.

“I did receive offers from clubs across Europe and Asia. It was the Benfica offer which I seriously thought about. It was a chance which I should have taken because I could have played with some of the world’s best players had I joined them.”

Ashfaq is no stranger on Asia’s FIFA World Cup™ qualifying scene, having scored 14 times across multiple attempts to reach global football’s extravaganza. Two of these goals were scored last year on the road to Qatar 2022 with strikes in a 2-1 loss to Syria and in a 3-1 victory against Guam.

“You know, scoring for the national team in World Cup qualifying is so special. The FIFA World Cup is the holy grail for all footballers.

“To me, it is the ultimate dream to compete in some way relating to the World Cup, even playing in the qualifying campaign. The Maldives is a small nation but we also dream big, dreams that someday we will be able to play in the World Cup.”

With two wins garnered across five outings, Maldives are trailing second-placed China PR and Philippines by just a point. Hopes of progressing as one of the best runners-up remain alive and they can secure a place among the heavyweights in Round 3 should they take maximum points from the remaining three matches.

“It is a hard group but every team, except for Guam, still have hope. So we are not written off. If we prepare well in advance and try our best, anything can happen.”

As one of the veterans of the current Maldives squad, however, Ashfaq dismissed the idea of winding down his career. “I still feel fit. I am working twice as hard as before to maintain my form and strengths. I want to continue to play a couple more years for both club and country. Because if I don’t play football, I don’t know what I would do.”

Back at the training pitch after a long time! 🇲🇻 pic.twitter.com/dV0KSBbyR2