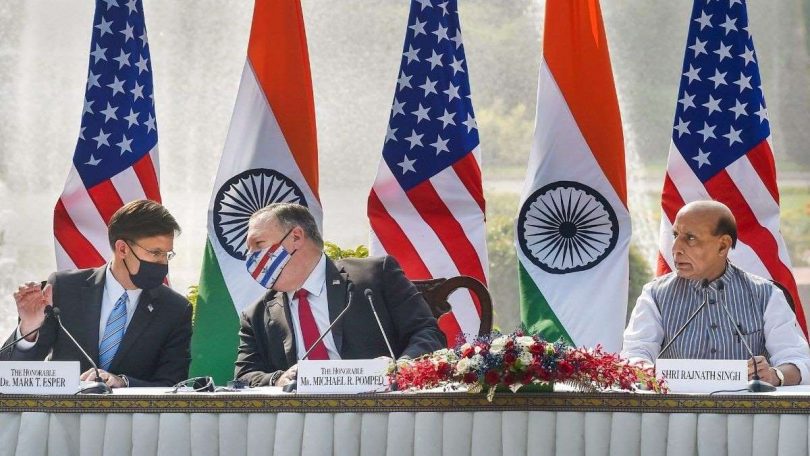 © Provided by The Print

After promising to ‘stand with’ India in its confrontation against China during his recent visit to New Delhi for the 2+2 meeting, US Secretary of State Mike Pompeo echoed the same sentiment in the Maldives and Sri Lanka, much to Beijing’s disgust. At the meeting with President Ibrahim Mohamed Solih, Pompeo said that China had brought lawlessness to the Maldives, even as the President himself, in a manner befitting of a small country with a debt of over $1 billion to China, didn’t mention Beijing at all.

What was significant, however, was that Pompeo announced the opening of an embassy in the archipelago, after 54 years of diplomatic relations with the Maldives. That is something for China to mull over. Together with the Defence and Security Framework signed earlier, this is quite a sea change in the region and a significant shift in Indian policy from 2013 when New Delhi firmly stood against any US presence in the region. So what changed?

India chose to carefully leak the fact that the “Framework for a Defence and Security Relationship” had been “shown” to New Delhi’s officials at Male (first?). That is interesting since the agreement was quietly signed during a private visit of Maldivian Defence Minister Mariya Didi to the US; no details are yet available.

The Indian Ministry of External Affairs (MEA) “welcomed” the move, stating rather surprisingly that the agreement did not demit from India’s role as a ‘security provider’ but in fact complimented it. Now that’s quite a volte-face, given the 2013 attempt by Male to sign a 10-year Status of Forces Agreement, which would have given US forces a base, independent telecommunications, and pretty much the run of the entire 1,192 islands. This transpired after senior Maldivian officials were flown to the USS John C Stennis, a nuclear-powered super-carrier, in a move reminiscent of the best spy thrillers. The agreement, however, came to nothing after New Delhi’s strong objections.

So, what’s different now? First, it’s not just an issue of the malign influence of Chinese investment, since this was more than evident in 2012, when an Indian infrastructure company, GMR Group, was virtually shown the door in favour of a Chinese firm in developing the Male international airport. That only led to Delhi throwing its weight behind a new government, and thereafter increasing its own investment profile with new grants and credit lines. The tipping issue, therefore, seems to be that Chinese hostility is now a given, with summits in exotic locales becoming a blurry picture of the past.

Second, while the current Maldivian government under the dignified President Solih is a trusted one, his Foreign Minister, Abdulla Shahid, understandably chose to maintain an even keel, speaking warmly of China’s huge contribution in tourism (which contributes two-thirds of its GDP) just days after India announced a Greater Male Connectivity Project – touted as the largest such single project. This was followed by huge anti-India protests, by an opposition coalition, which, for the first time in bilateral history, led to the armed forces being called in to protect Indian diplomatic installations. Clearly, China, or its supporters, are not going to allow Indian influence.

Third, while President Solih has since scrapped a Chinese proposal for a “Joint Ocean Observation Centre” (which is milspeak for a Chinese naval lookout point), the defence of India, just a few hundred nautical miles away, can’t be ensured with a few pilots who fly the two Advanced Light Helicopters gifted earlier, or an occasional Army medical team. Neither can India bar a sovereign country from entertaining Chinese warships, as Male did in 2017. Certainly, a permanent US warship presence will prevent that; but that’s the catch. Any US presence is now far more permanent than the still distant probability of a Chinese one. That does seem an excessive price to pay for keeping the Chinese out of the Maldives.

A party in the making

As of now, however, any price would be admissible. The World Bank expects a 9.6 per cent plunge in India’s GDP. The public debt-to-GDP ratio is expected to rise to 90 per cent, which is appalling even without the costs of ramping up the defence in the fight against China in Ladakh. The defence budget is still in the doldrums at 2.1 per cent of GDP. At a time of crisis, it seems that the only way to operationalise the ‘maritime option’ against China is by acquiescing to a presence in the Indian Ocean of the most powerful navy globally. Adding 2+2 to get the requisite number, it means that at the minimum, US naval ships can be expected to dock at Male, ostensibly for ‘counter-piracy missions’, a US Ambassador will take up residence, who will for the moment work with the far more experienced Indian mission.

Meanwhile, with all four foundational agreements signed, there is the possibility of sharing accurate geospatial information on a ‘case by case’ basis. In other words, the US will share what it thinks it should. Don’t look for any drastic change in intelligence about Pakistan. In the case of China, too, the data provided – for instance, to launch a missile – might well be selective. But it does provide Delhi with a valuable, though probable,‘power up’ at a time of crisis.

All this totalled up makes this just short of an open alliance. It certainly puts aside the reservations of earlier governments in retaining an Indian ‘sphere of influence’. Forget the ‘net security provider’ language as well. Any help it needs in that direction is available from the US embassy.

Meanwhile, look at the bright side. The Chinese mission expressed its outrage over Pompeo’s statements, with the Global Times nastily saying that US presence will threaten India rather than China. Beijing should get ready for the seas to get more crowded. Other Quad members like Japan and Australia are likely to come calling. All in all, quite a party in the making. Let’s hope the Indian mission will be the disc jockey.

The author is a former director, National Security Council Secretariat. Views are personal.