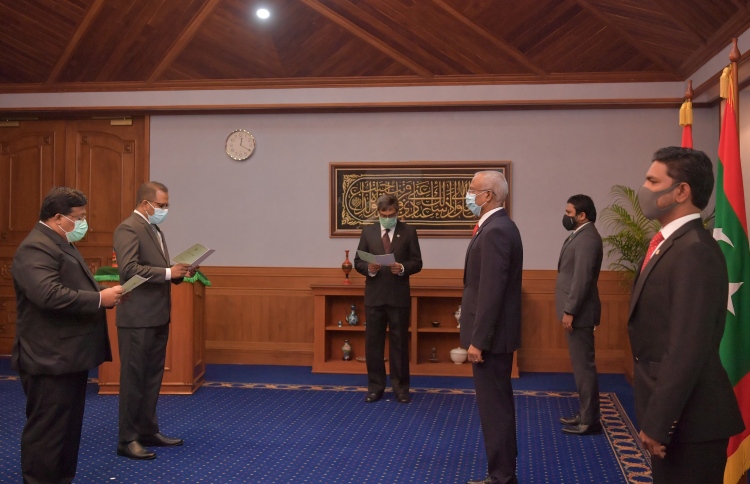 President Solih presented the new justices with their letters of appointment during a ceremony hosted at the President’s Office. Supreme Court Chief Justice administered the oaths of office for Ali Rasheed and Dr Mohamed.

The parliament had approved the appointment of the two individuals on Sunday, with Ali Rasheed receiving 55 votes in favour and one against while Dr Mohamed received 63 votes in his favour.

President Ibrahim Mohamed Solih forwarded the two names to the parliament on August 19 after the Judicial Service Commission (JSC) green-lighted their nomination.

Prior to temporarily taking over the Criminal Court’s responsibilities in late 2019 following JSC’s decision to suspend the then-Chief Judge Ahmed Hailam, Ali Rasheed had formerly filled the position of Civil Court’s Chief Judge, in addition to sitting on the Drug Court’s bench.

He was also the first-ever judge to sentence a suspect to capital punishment following the enactment of the 2008 Constitution. The verdict, delivered in 2010, was later upheld by the Supreme Court in 2016.

Ali Rasheed holds a Bachelor of Shari’ah and Law from Al-Azhar University, Egypt.

Dr Mohamed completed a Doctorate in Islamic Commercial Law from the University of Malaya, Malaysia, and is a shareholder of well-known law firm Premier Chambers. With 16 years of expertise in the legal sector, Dr Mohamed also serves as a council member at the Islamic University of Maldives and a member of the Shari’ah Committee of Housing Development Finance Corporation (HDFC).

JSC opened for applications to apply for the Supreme Court bench earlier in August 2019, when two seats on the seven-member bench were vacated.

Following the two latest appointments, there are no longer any vacancies on the apex court’s bench.