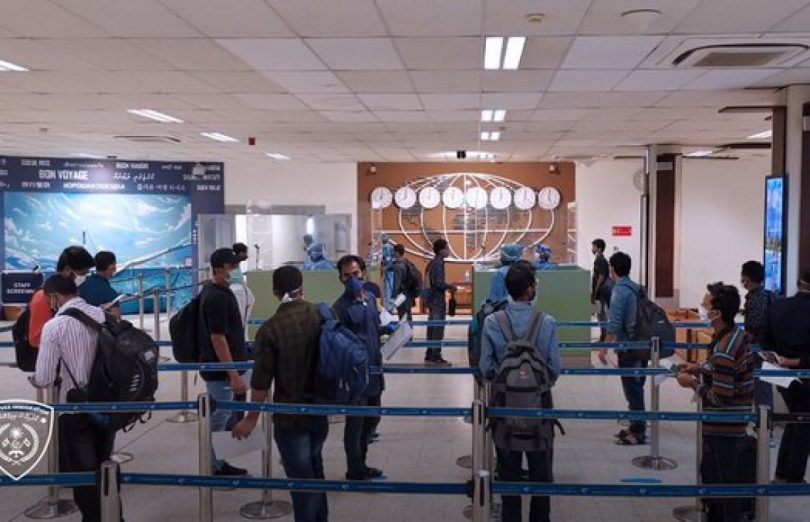 Ministry of Foreign Affairs announced the repatriation of 420 undocumented Bangladeshi workers from the Maldives.

According to the ministry, 353 Bangladeshi nationals were repatriated via a chartered flight by the government of Maldives on Saturday. The remaining 67 expatriates were transported Sunday morning, aboard a Bangladeshi Air Force aircraft which brought 10 tonnes of food supplies, medicine and medical equipment to the Maldives this weekend.

353 Bangladeshis were repatriated today, via Biman flight chartered by GOM and a further 70 Bangladeshis will be departing on the 🇧🇩 Air Force flight which arrived today. I thank the govt. of #Bangladesh & all the agencies involved from both sides for their tireless efforts.

The foreign ministry noted that the Bangladeshi workers were returned home as part of the state’s efforts to repatriate undocumented foreign labourers, in collaboration with the Ministry of Economic Development.

The evacuation flight from Bangladesh was boarded with 353 Bangladeshi nationals from Maldives. pic.twitter.com/rkFeRyEGth

Bangladeshi citizens make up the majority of the expatriate population in the Maldives, which numbers at over 144,600, out of which authorities earlier estimated that 63,000 were undocumented.

Previously, Minister of Economic Affairs Fayyaz Ismail revealed that a total of 837 undocumented workers had submitted requests for repatriation after the government opened for registration on March 21.

On May 1, Minister of Economic Development Fayyaz Ismail disclosed that work was underway to repatriate 300 Bangladeshi nationals.

President Ibrahim Mohamed Solih later that same week, on May 5, also announced that 1,500 Bangladeshi nationals with undocumented status were to be repatriated within the past week. However, authorities have not provided an official update on this operation.

Since the beginning of the community-wide outbreak of COVID-19 in the Maldives, the total number of Bangladeshi expatriates that have tested positive for the virus have surpassed 550. Roughly 52 per cent of all confirmed cases in the country are Bangladeshi citizens.

As many expatriates live in small, unhygienic and congested spaces, particularly in capital Male’ City, officials have expressed concern that the COVID-19 outbreak places them at most risk of contracting and spreading the infection.

The Maldives currently records 1,078 confirmed cases of COVID-19 with 1,015 active cases, 59 recoveries and 4 fatalities. Capital city Malé, one of the most densely populated places in the world, has recorded a significant increase in COVID-19 cases since recording its first local transmission on April 15.

The country recorded its first COVID-19 related death, of an 83-year-old local female, on April 29. Since, three more individuals, a 33-year-old Bangladeshi man, and two local men, an 80-year-old and an 88-year-old succumbed to COVID-19.

The World Health Organization has classified the spread of COVID-19 as a global pandemic. The new strain of novel coronavirus has infected over 4.7 million people and claimed over 313,266 lives around the world. However, out of those infected, 1.81 million people have recovered.