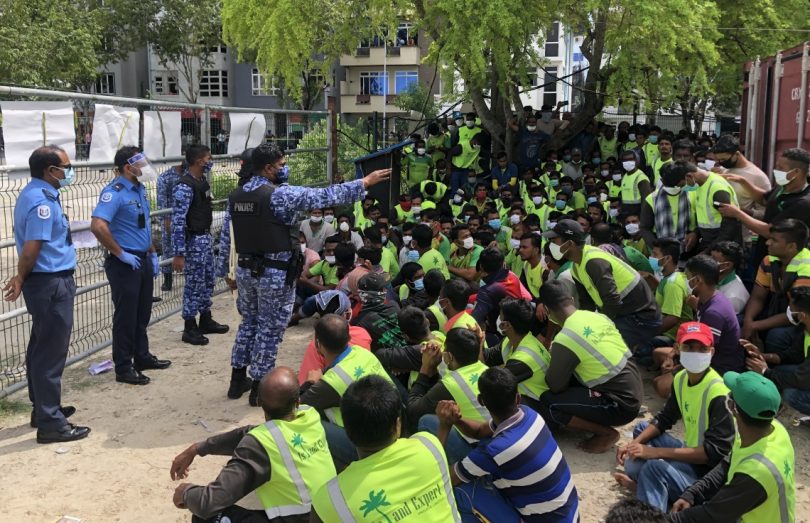 Maldives Immigration, on Friday, revealed that a total of 266 foreigners arrived in the Maldives for employment purposes since borders were reopened for international passengers on July 15.

According to Immigration, the expatriate workers came from a list of countries including Sri Lanka, India, Turkey, Philippines, China, Italy, Egypt, the United Kingdom, France and Malaysia.

Accounting for 123 arrivals, the largest number of migrant workers were from Sri Lanka, followed by India and Turkey with 36 and 13 arrivals respectively.

Recently, several expat-led protests were staged across the Maldives over issues including unpaid wages and inhumane living conditions.

On July 2, Maldives Police Service arrested 19 out of 203 expatriate workers from Bodufinolhu, Baa Atoll, following protests over six months of unpaid salary, which culminated in the holding of 13 Maldivian staff hostage on the island. Bodufinolhu is being developed as a resort property by Seal Maldives.

An additional 41 arrests were made on July 13 after expatriates employed by Island Expert Pvt Ltd staged a violent protest on the reclaimed suburb of Hulhumale’, over unpaid wages and inhumane treatment.

A total of 22 expatriate workers were also arrested following a protest on an undisclosed island located in Vaavu Atoll which is slated for development as a resort.

The migrant workers detained in these protests, two of which resulted in property damage, are currently under investigation.

While rights groups in the Maldives and the general public have continued to express concern over the situation of migrant workers, the Human Rights Watch (HRW) called on the Maldivian government to release all expatriate workers detained for engaging in peaceful protests and drop any criminal charges lodged.

As per official figures, there are approximately 82,000 registered and 63,000 undocumented migrant workers in the Maldives, which represents around one-third of the population.