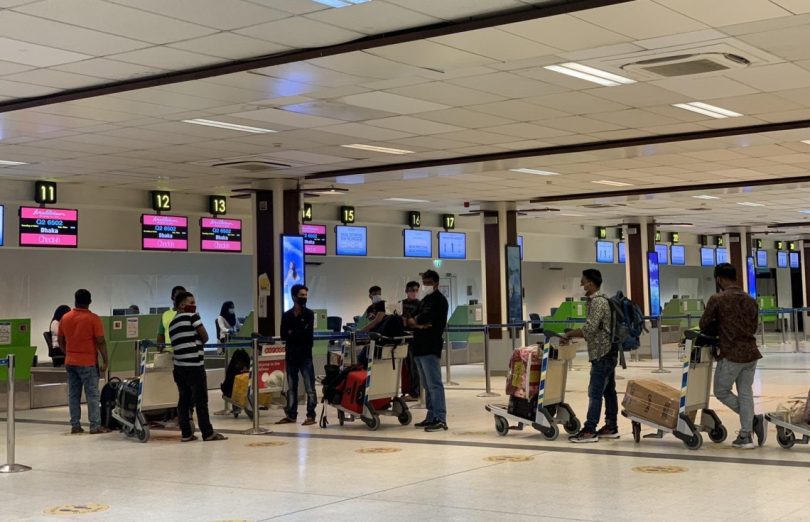 The Ministry of Foreign Affairs, on Monday, revealed that 200 migrant workers, from Bangladesh, were repatriated to their home country.

These individuals were flown to Bangladeshi capital Dhaka via the national carrier, Maldivian.

Director of Communications at the Foreign Ministry, Miuvan Mohamed, stated that 100 of the Bangladeshi citizens repatriated on Monday were undocumented migrants, while the remaining 100 had chosen to return to their home country despite possessing proper documentation.

Miuvan revealed that, till date, a total of 3,369 people were sent back to Bangladesh as part of the government’s repatriation efforts amid the ongoing COVID-19 pandemic.

The virus outbreak in capital Male’ disproportionately affected the migrant worker population, the majority of whom are Bangladeshi nationals living in highly congested quarters where it is impossible to reduce contact or exercise social distancing. Their often small-spaced living conditions have been described by local and international civil society organizations as, “claustrophobic”, “unsanitary” and “overcrowded”.

In an attempt to curb the spread of COVID-19, particularly in congested labour quarters, the government initiated efforts to transfer expatriate workers to safer environments, including temporary shelters in Hulhumale’, Thilafushi and Gulhifalhu.

According to the Health Protection Agency (HPA), migrant workers consist of 64 per cent of the positive cases identified in the Maldives, with Bangladeshi citizens accounting for 1,285 cases or 51.59 per cent of the total.

Overall, the country presently records 2,491 confirmed and 361 active cases of COVID-19. Till date, the country has reported 2,113 recoveries and 12 fatalities.

However, the number of recoveries have continued to rise, with 82 per cent of patients now recovered.

On March 12, WHO classified the spread of COVID-19 as a global pandemic. To date, the new strain of novel coronavirus has infected over 11.7 million people and claimed over 540,677 lives around the world. However, out of those infected, more than 6.6 million people have recovered.